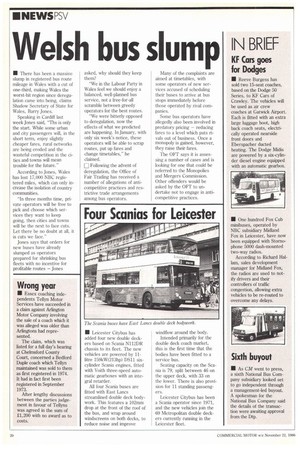 Page 22, 22nd November 1986 — Four Scanias for Leicester
Close
Noticed an error?
If you've noticed an error in this article please click here to report it so we can fix it.

All four Scania buses are fitted with East Lancs streamlined double deck bodywork. This features a 102mm drop at the front of the roof of the bus, and wrap around windscreens on both decks, to reduce noise and improve v.indflow around the body.

Intended primarily for the double deck coach market, this is the first time that the bodies have been fitted to a service bus.

Seating capacity on the Scania is 79, split between 46 on the upper deck, with 33 on the lower. There is also provision for 11 standing passengers.

Leicester Citybus has been a Scania operator since 1971, and the new vehicles join the 69 Metropolitan double deckers currently running in the Leicester fleet.