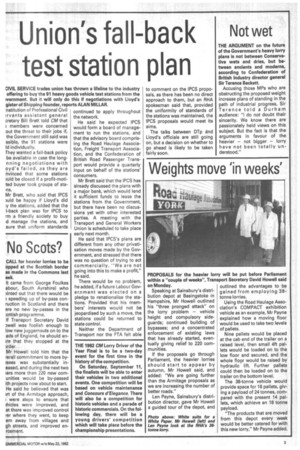 Page 3, 22nd May 1982 — Not wet
Close
Noticed an error?
If you've noticed an error in this article please click here to report it so we can fix it.
Keywords : Conservative Party, Wets & Dries, Lorry, Confederation Of British Industry, Politics

THE ARGUMENT on the future of the Government's heavy lorry plans is not between Conservative wets and dries, but between ancients and moderns, according to Confederation of British Industry director general Sir Terence Beckett.

Accusing those MPs who are obstructing the proposed weight increase plans of standing in the path of industrial progress, Sir Terence told a Durham audience: "I do not doubt their sincerity. We know there are passionately held views on this subject. But the fact is that the arguments in favour of the heavier — not bigger — lorry have not been totally understood."