The Press and the Parade. 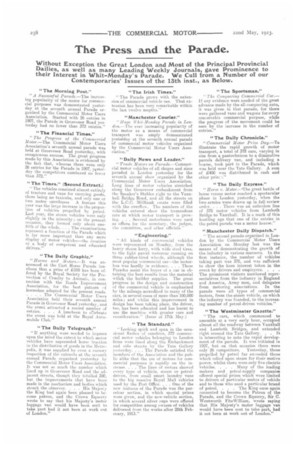 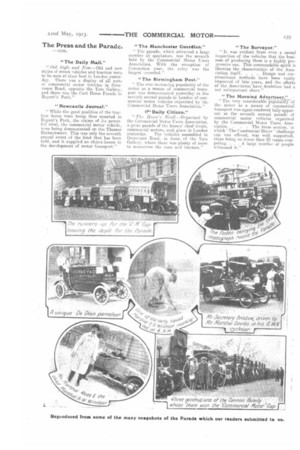 Page 18, 22nd May 1913 — The Press and the Parade.
Close
Noticed an error?
If you've noticed an error in this article please click here to report it so we can fix it.
Keywords : Alternative Propulsion, Steam Wagon, Electric Vehicle, Parade, Vehicle, Technology / Internet, Business / Finance

Without Exception the Great London and Most of the Principal provincial Dailies, as well as many Leading Weekly Journals, gave Prominence to their Interest in Whit-Monday s Parade. We Cull from a Number of our Contemporaries' Issues of the 15th inst., as Below.

'A Successful Parade.—The increasing popularity of the motor for commercial purposes was demonstrated yesterday at the seventh annual Parade organized by the Commercial Motor Users Association. Started with 26 entries in 1907, the Parade in Grosvenor Road yesterday had no fewer than 372 entries.'' " The Financial Times."

" The Progress of the Commercial Motor.—The Commercial Motor Users Association's seventh annual parade was held at Grosvenor Road yesterday, with conspicuous success. The great progress made by this Association is evidenced by the fact that, whereas there were only 26 entries for the Parade in 1907, Asterday the competitors numbered no fewer than 372."

"'the vehicles consisted almost entirely of tractors and vans for carrying goods, there being no taxicabs, and only one or two motor omnibuses A feature this year was the large increase in the proportion of vehicles propelled by petrol. Last year, the steam vehicles were only slightly in the minority; on the present occasion, they formed only about onefifth of the whele. . . The examinations represent a function of the Parade which is far more important than any mere display of motor vehicles—the creation of a body of competent and educated drivers."

" The Daily Graphic." "horses and Motors.—It was announced at the Cart Horse Parade luncheon that a prize of L100 has been offered by the Royal Society for the Preveetion of Cruelty to Animals, in connection with the Roads Improvement Association, for the best pattern horseshoe adapted for the present roads.

. . . The Commercial Motor Users Association held their seventh annual Parade in Grosvenor Road yesterday, and the event attracted a record number of entries. . . A luncheon to cilehrate the event was held at the Royal Automobile Club."

"If anything were needed to impress upon the mind the extent to which motor vehicles have superseded horse traction in the distribution of goods in the Metropolis, it was supplied by even a cursory inspection of the entrants at the seventh annual Parade organized yesterday by the Commercial Motor Users Association. It was not so much the number which lined up in Grosvenor Road aud the adjacent streets, though they totalled 380, but the improvements that have been made in the mechanism and bodies which struck the observer. . . . His MajesLy the King had again been pleased to become patron, and the Crown Equerry wrote to say that his Majesty's motor luggage van would have been sent to take part had it not been at work out of London." "The Irish Times."

" The Parade grows with the extension of commercial vehicle use. That extension has been very remarkable within the last twelve mopths."

" Huge Whit-Monday Parade in London.—The ever increasing popularity of the motor as a means of commercial transport was amply demonstrated yesterday at the seventh annual parade of commercial motor vehicles organized by the Commercial Motor Users Association."

"Trade Motors on Parade.—Commercial motor vehicles of all shapes and sizes paraded in London yesterday for the seventh annual show organized by the Commercial Motor Users Association. Long lines of motor vehicles stretched along the Grosvenor embankment from the Speaker's Stables right to the Vauxhall Bridge Road, and all the streets on the L.C.C. Millbank estate were filled eith the overfloa. The numbers of the vehicles entered show the tremendous rate at which motor transport is growing. . . Several motorbuses were used as offices for the secretary, the judges, the committee, and othes officials."

" All kinds of commercial vehicles 14 ere represented on Monday, from the heavy steam lorry, with wide steel tires, to the light parcel motorcar running on three rubber-tired wheels, although the most popular commercial car—the motorbus was hardly in evidence. . . . These Parades assist the buyer of a car in obtaining the best results from the material which the builder supplies. The great progress in the design and construction of the commercial vehicle is emphasized by the mileage accredited to many of the cars, in several cases of more than 100,000 miles; and whilst this improvement in design has been taking place, the driver, too, has been educated and has learnt to use the machine with greater care and consideration." (Issue of 17th May.) "The Standard."

"Looking spick and span in the occasional flashes of sunshine, 372 commercial motor vehicles belonging to London firms were lined along the Embankment and side streets by the Tate Gallery yesterday. . . . The Parade satisfied the members of the Association and the public alike that the use of motors for commercial purposes is rapidly on the increase. . . . The lines of motors showed every type of vehicle, steam or petroldriven, from small smart laundry vans to the big massive Royal Mail vehicles

used by the Post Office. . One of the new features of the Parade was the parcelcar section, in which special prizes were given, and the new-vehicle section, in which several silver cups were offered for competition among owners of vehicles delivered from the works after 28th February, 1913." "The Sportsman."

7/ ca oneruering Commarcial Car.— If any evidence were needed of the great advance made by the all-conquering auto, it was given in that parade, for there were gathered vans and wagons for every conceivable commercial purpose, while the progress of the movement could be seen by the increase in the number of entries."

"The Daily Chronicle." "Commercial Motor Prize Day.—To illustrate the rapid growth of motor transport, a, total of 378 cars, varying in size from a pantechnicon to a diminutive parcels delivery van, and including a hearse, took part in the Parade, which was held near the Tate Gallery. A sum of £400 was distributed in cash and other prizcs."

"Horse v. Motor.--•The great battle of horse versus motor reached a spectacular phase in London yesterday, when the two armies were drawn up in full review order. . . . There was an unbroken line of 378 motor vehicles from Lambeth Bridge to Vauxhall. It is a mark of this hustling age that one of the entries in the petrol parade was a motor hearse."

" The annual parade organized in London by the Commercial Motor Users Association on Monday last was the means of demonstrating the growth of the industry in various manners. In the first instance, the number of vehicles taking part was 378, and was sufficient to show the keen interest taken in the event by drivers and employers. . . . The prominent visitors numbered representatives from the industry in England and America, Army men, and delegates from motoring associations. In the parade were all types of commercial motors, from the steam vehicle, on which the industry was founded, to the increasing number of petrol-driven vehicles."

"The cars, which commenced to assemble at a very early hour, occupied almost all the rodway between Vauxhall and Lambeth Bridges, and extended right around tho Tate Gallery. . . It is interesting to note the rapid development of the parade. It was initiated in 1907, but on that occasion there were only 26 competitors. Yesterday, those propelled by patrol far exceeded those which relied upon steam for their motive power, whilst there were only five electric vehicles. . . . Many of the leading makers and petrol-supply companies offered special prizes which were limited to drivers of particular makes of vehicle and to those who used a particular brand of petrol. . . . The King once again consented to become the Patron of the Parade, and the Crown Equerry, Sir C. Wentworth FitzWilliam, wrote saying that His Majesty's motor luggage van would have been sent to take part, had it not been at work out of London."

"Old Style and New.—Old and new styles of street vehicles and traction were to be seen at their best in London yesterday. There was a display of all sorts of commercial motor vehicles in Grosvenor Road, opposite the Tate Gallerv, and there was the Cart Horse Parade in Regent's Park."

"While the good qualities of the traction horse were being thus asserted in Regent's Park, the claims of its powerful rival, the commercial motor vehicle, were being demonstrated on the Thames Embankment. This was only the seventh annual event of the kind that has been held, and it supplied an object-lesson in the development of motor transport."

" The parade, which attracted a large number of spectators, was the seventh held by the Commercial Motor Users Association. With the exception of Coronation year, the entry was the largest ...ecorded."

" The ever-increasing popularity of the motor as a. means of ecimmercial transport was demonstrated yesterday at the seventh annual parade in London of commercial motor vehicles organized by the Commercial Motor Users Association."

" The Horse's Rival.--Organized by the Commercial Motor Users Association, a great parade of the horses' chief rivals, commercial motors, took place in London

yesterday. The vehicles assembled in Grosvenor Road, in front of the Tate Gallery. where there was plenty of room to inauceuvre the vans and tractors."

" it was evident from even a casual inspection of the vehicle's that the business of producing them is a highly progressive one. This commendable spirit, is likewise the characteristic of the Association itself. . . . Design and constructional methods have been vastly improved of late years, and the efforts of the Association have doubtless had a not unimportant share."

"The very considerable populircirrof the motor as a means of commercial transport was again rendered fully apparent at the seventh annual parade of commercial motor vehicles organized by the Commercial Motor Users Asso ciation. . . . The team section, in which The Commercial Motor' challenge cup was offered, was well supported, there being no fewer than 22 teams com

peting. . A large number of people witnessed it."