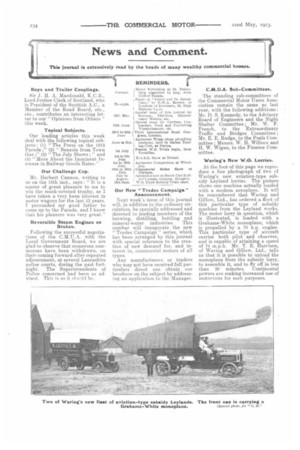 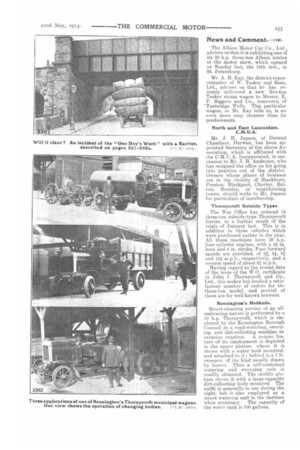 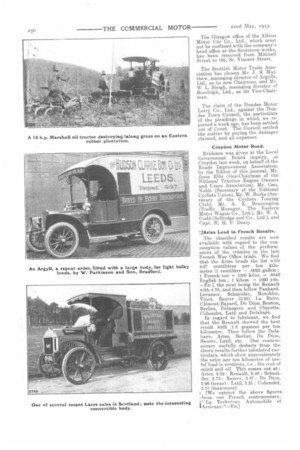 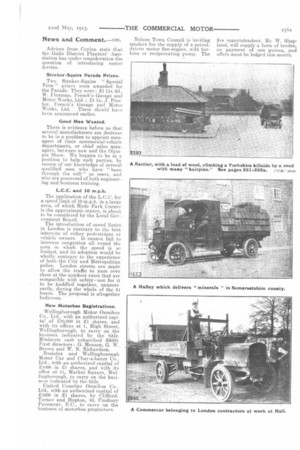 Page 12, 22nd May 1913 — News and Comment.
Close
Noticed an error?
If you've noticed an error in this article please click here to report it so we can fix it.
Keywords : Road Transport, Trucks, Manufacturing, Steam Wagon, Thornycroft, Renault, Ton, Traction Engine, Berliet

Sir J. IL A. Macdonald, K.C.B., Lord Justice Clerk of Scotland, who is President of the Scottish A.C., a Member of the Road Board, etc., etc., contributes an interesting letter to our " Opinions from Others" this week.

Mr. Herbert Cannon, writing to us on the 15th inst., says : "It is a source of great pleasure to me to win the much-coveted trophy, as I have taken a very keen interest in motor wagons for the last 13 years. I persuaded my good father to come up to the Parade, and I know that his pleasure was very great."

Following the successful negotiations of the C.M.U.A. with the Local Government Board, we are glad to observe that numerous summonses have been withdrawn, on their coming forward after repeated adjournment, at several Lancashire police courts, during the past fortnight. The Superintendents of Police concerned had been so advised. This is as it sholdd be.

special issue of this journal for 1

Next week's issue of this journal will, in addition to the ordinary circulation, be specially addressed and directed to leading members of the brewing, distilling, bottling and mineral-water industries. This number will inaugurate the new "Trades Campaign" series, which has been arranged by this journal with special reference to the creation of new demand for, and interest in, commercial motors of all types. Any manufacturers or traders who may not have received full particulars direct can obtain our brochure on the subject by addressing an application to the Manager. C.M.11.A. Bub.Committees.

The standing sub-committees of the Commercial Motor Users Association remain the same as last year, with the following additions : Mr. D. S. Kennedy, to the Advisory Board of Engineers and the Night Shelter Committee ; Mr. W. F. French, to the Extraordinary Traffic and Bridges Committee ; Mr. E. E. Budge, to the Fuels Committee ; Messrs. W. II. Willcox and H. W. Wigan, to the Finance Committee.

At the foot of this page we reproduce a fine photograph of two of Waring's new aviation-type subsidy Leyland lorries. The picture shows one machine actually loaded with a modern aeroplane. It will be remembered that Waring and Gillow, Ltd., has ordered a. fleet of this particular type of subsidy machine from the Leyland works. The motor lorry in question, which is illustrated, is loaded with a Grahame-White monoplane, which is propelled by a. 70 h.p. engine. This particular type of aircraft carries both pilot and observer, and is capable of attaining a speed of 74 m.p.h. Mr. T, E. Harrison, of Waring and Gillow, Ltd., tells us that it is possible to unload the monoplane from the subsidy lorry, to assemble it, and to fly off in less than 20 minutes. Continental powers are making increased use of rnotorvans for such purposes. The Albion Motor Car Co., Ltd., advises us that it is exhibiting one of its 32 h.p. three-ton Albion lorries at the motor show, which opened on Sunday last, the 18th inst., in St. Petersburg.

Mr. A. H. Kay, the district representative of W. Tasker and Sons, Ltd., advises us that he has recently delivered a new five-ton Tanker steam wagon to Messrs_ E. P. Biggers and Co., removers, of 'Tunbridge Wells. This particular wagon, so Mr. Kay tells us, is an even more easy steamer than its predecessors.

Mr. J. H. Jepson, of District Chambers, Darwen, has been appointed Secretary of the above Association, which is affiliated with the C.M.U.A. Incorporated, in succession to Mr. J. H. Anderson, who has resigned the office on his going into practice out of the district. Owners whose places of business are in the vicinity of Blackburn, Preston, Blackpool, Chorley, Bolton, Burnley, or neighbouring towns, should write to Mr. Jepson f or particulars of membership.

The War Office has ordered 15 three-ton subsidy-type Thornycroft lorries, as a further result of the trials of January last. This is in addition to three vehicles which were purchased earlier in the year. All these machines have 30 h.p. four-cylinder engines, with a 4 in. bore and 5 in. stroke. Four forward speeds are provided, of 2, 5, 8! and 15e m.p.h., respectively, and a reverse speed of about 21 m.p.h. Having regard to the recent date of the issue of the W.O. certificate to John I. Thornycroft and Co., Ltd., this maker has booked a satisfactory number of orders for the three-ton model, and several of these are for well-known brewers.

Kensington's Methods. Street-cleaning service of an allembracing nature is performed by a 30 h.p. Thornycroft, which is employed by the Kensington Borough Council as a road-watering, sweeping. and dirt-collecting machine as occasion requires. A unique feature of its employment is depicted in the upper picture, where it is shown with a water tank mounted, and attached to it; behind is a 7 ft. sweeper, of the kind usually drawn by horses. Thus a self-contained watering and sweeping unit is readily obtained. The middle picture shows it with a large-capacity dirt-collecting body mounted The outfit is generally in use during the night, but is also employed as a street watering unit in the daytime when necessary. The capacity of the water tank is 700 gallons. The Glasgow office of the Albion Motor Car Co., Ltd., which must not be confused with the company's head office at the Scotstoun works, has been removed from Mitchell Street to 105, St. Vincent Street.

The claim of the Dundee Motor Lorry Co., Ltd., against the Dundee Town Council, the particulars of the pleadings in which we reported a week ago, has been settled out of Court. The Council settled the matter by paying the damages claimed, and all expenses.

The classified results are now available with regard to the consumption values of the performances of the vehicles in the last French War Office trials. We find that the Aries heads the list with 4.27 centilitres per ton kilometre (1 centilitre = .0022 gallon ; 1 French ton = 1000 kilos, = .9842' English ton ; 1 kilom. = 1083 yds. —ED.], the next being the Renault with 4.70, and then follow PanharclLevassor, Schneider, Motobloc, Vinot, Saucer (5.25). La Buire, Clement-Bayard, De Dion Bouton, Berliet, Delaugere and Clayette, Cohendet, Latil and Delahaye.

In regard to lubricant, we find that the Renault showed the best result with 1.3 gramme per ton kilometre. Then follow the Delahaye, Aries, Berliet. De Dion, &borer, Latil. etc. Our contemporary usefully deducts from the above results further tabulated particulars, which show approximately the price per ton kilometre of useful load in centimes, i.e., the cost of spirit and oil. This comes out iaotn Aries. 2.32: Renault, 2.48 : Schneider, 2.73: Saurer, 2 2.96 (mean) Latil, 3.21 ; Cohendet, 3.51 (maximum).

Advices from Ceylon state that the Galle District Planters' Asoociation has under consideration the question of introducing motor lorries.

There is evidence before us that several manufacturers are desirous to be in a position to appoint managers of their commercial-vehicle departments, or chief sales managers. between now and the Olympia Show. We happen to be in a position to help such parties, by reason of our knowledge of several qualified men who have "been through the mill" as users, and who are possessed of both engineering and business training.

The application of the L.C.C. for a speed limit of 10 m.p.h. in a. large area, of which Hyde Park Corner is the approximate centre, is about to be considered by the Local Government Board.

The introduction of speed limits in London is contrary to the best interests of either pedestrians or vehicle owners. It cannot fail to increase congestion all round the area in which the speed is so limited, and its adoption would be wholly contrary to the experience of both the City and Metropolitan police. London streets are made to allow the traffic to pass over them at the quickest rates that are compatible with safety—not for it to be huddled together, unnecessarily, during the whole of the 24 hours. The proposal is altogether ludicrous.

Wellingborough Motor Omnibus Co., Ltd., with an authorized capital of 210,000 in 21 shares, and with its offices at 1, High Street, Wellingborough, to carry on the business indicated by the title. Minimum cash subscribed £6000. First directors : G. Henson, G. W. Brown and W. B. Richardson.

Rusliclen and Wellingborough Motor Car and Char-a-banes Co., Ltd., with an authorized capital of £1000 in 21 shares, and with its office at 14, Market Square, Wellingborough, to carry on the business indicated by the title.

United Counties Omnibus Co.. Ltd., with an authorized capital of 25000 in 21 shares, by Clifford, Turner and Hopton, SO, Finsbury Pavement, E.C., to carry on the business of motorbus proprietors. Nelson Town Council is inviting tenders for the supply of a petroldriven motor fire-engine, with turbine or reciprocating pump. The

fire superintendent, Mr. W. Shapland, will supply a form of tender, on payment of one guinea, and offers must be lodged tnis month.