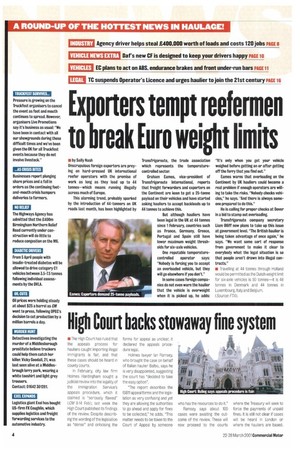 • The High Court has ruled that the appeals process for hauliers caught importing illegal immigrants is fair, and that these cases should be heard in county courts.

In February, city law firm Holmes Hardingham sought a judicial review into the legality of the Immigration Service's appeals procedure, which it claimed is "seriously flawed" (CM 8-14 Feb); last week the High Court published its findings of the review. Despite describing the wording of the legislation as "dense" and criticising the

forms for appeal as unclear, it declared the appeals procedure legal.

Holmes lawyer Ian Ramsey, who brought the case on behalf of Italian haulier Balbo, says he is very disappointed, suggesting the court has "decided to take the easy option".

"The report describes the ISB11 appeal forms and the legislation as very confusing and yet they are allowing the authorities to go ahead and apply for fines to be collected," he adds. "This matter needs to be taken to the Court of Appeal by someone who has the resources to do it."

Ramsey says about 100 cases were awaiting the outcome of the review. These will now proceed to the courts where the Treasury will seek to force the payments of unpaid fines. It is still not clear if bases will be heard in London or where the hauliers are based.