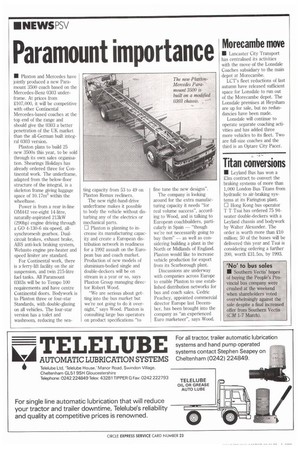 Page 16, 22nd March 1990 — Paramount importance
Close
Noticed an error?
If you've noticed an error in this article please click here to report it so we can fix it.
Keywords : Buses, Plaxton, Scarborough, North Yorkshire, Plaxton Pronto

• Plaxton and Mercedes have jointly produced a new Paramount 3500 coach based on the Mercedes-Benz 0303 underframe. At prices from £107,000, it will be competitive with other Continental Mercedes-based coaches at the top end of the range and should give the 0303 a better penetration of the UK market than the all-German built integral 0303 version.

Plaxton plans to build 25 new 3500s this year, to be sold through its own sales organisation. Shearings Holidays has already ordered three for Continental work. The underframe, adapted from the below-floor structure of the integral, is a skeleton frame giving luggage space of 10.17ms' within the wheelbase.

For Continental work, there is a ferry-lift facility on the air suspension, and twin 215-litre fuel tanks. All Paramount 0303s will be to Tempo 100 requirements and have centre Continental doors. Bodywork is to Plaxton three or four-star Standards, with double-glazing on all vehicles_ The four-star version has a toilet and washroom, reducing the sea ting capacity from 53 to 49 on Plaxton Remax recliners.

The new right-hand-drive underframe makes it possible to body the vehicle without disturbing any of the electrics or mechanical parts.

LI Plaxton is planning to increase its manufacturing capacity and create a European distribution network in readiness for a 1992 assault on the European bus and coach market. Production of new models of aluminium-bodied single and double-deckers will be on stream in a year or so, says Plaxton Group managing director Robert Wood.

"We are serious about getting into the bus market but we're not going to do it overnight," says Wood. Plaxton is consulting large bus operators on product specifications "to fine tune the new designs".

The company is looking around for the extra manufacturing capacity it needs "for real volume success", according to Wood, and is talking to European coachbuilders, particularly in Spain — "though we're not necessarily going to buy them" — as well as considering building a plant in the North or Midlands of England. Plaxton would like to increase vehicle production for export from its Scarborough plant.

Discussions are underway with companies across Europe to enable Plaxton to use established distribution networks for bus and coach sales. Cedric Peachey, appointed commercial director Europe last December, has been brought into the company as "an experienced Euro marketeer", says Wood.