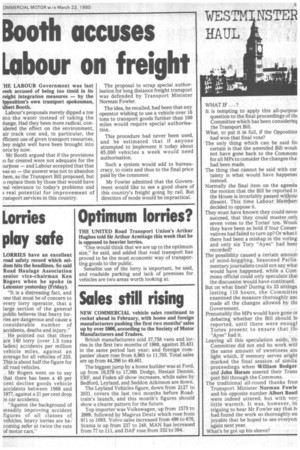 Page 7, 22nd March 1980 — WESTM NSTER HAUL
Close
Noticed an error?
If you've noticed an error in this article please click here to report it so we can fix it.
Keywords : John Horam, Tory, Politics

It is tempting to apply this all-purpos( question to the final proceedings of th( Committee which has been considerinf the Transport Bill.

What, to put it in full, if the Oppositior had won that final vote?

The only thing which can be said foi certain is that the amended Bill woult not have gone back to the Commom for all MPs to consider the changes that had been made.

The thing that cannot be said with cer tainty is what would have happenec instead.

Normally the final item on the agenda the motion that the Bill be reported tc the House is invariably passed without dissent. This time Labour Member: decided to oppose it.

They must have known they could neve] succeed, that they could muster .on13 seven votes to the Tories' ten. Woulc they have been so bold if four Conser vatives had failed to turn up? Or what i' there had been a mishap in the voting and only six Tory "Ayes" had beer recorded?

The possibility caused a certain amouni of mind-boggling. Seasoned Parka. mentary journalists could not say whai would have happened, while a Corn. mons official could only speculate thai the discussion would have continued.

But on what lines? During its 33 sittings lasting 110 hours, the Committee examined the measure thoroughly anc made all the changes allowed by the Government.

Presumably the MPs would have gone or debating whether the Bill should ID( reported, until there were enougl Tories present to ensure that th( "Ayes" had it.

Leaving all this speculation aside, th( Committee did not end its work witl the same amount of sweetness an light which, if memory serves aright marked the final session of simila proceedings when William Rodger: and John Horam steered their Trans port Bill through the Commons. The traditional all-round thanks fron Transport Minister Norman Fowle and his opposite number Albert Bootl were indeed uttered, but with ver: little warmth. It was, however, in triguing to hear Mr Fowler say that hi had found the work so thoroughly en joyable that he hoped to see everyon, again next year.

What's he got up his sleeve?