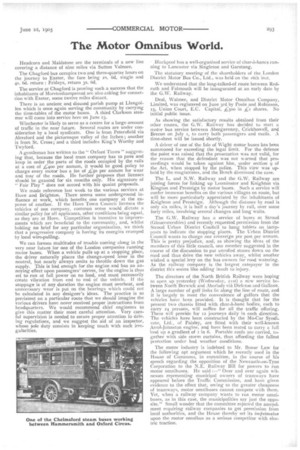 Page 5, 22nd June 1905 — The Motor Omnibus World.
Close
Noticed an error?
If you've noticed an error in this article please click here to report it so we can fix it.
Keywords : Nottingham, Buses, Double-decker Buses

Headcorn and Maidstone are the terminals of a new line covering a distance of nine miles via Sutton Valence.

The Chagford bus occupies two and three-quarter hours on the journey to Exeter, the fare being 25. 6d. single and 45. 6d. return : Fridays, return 3s. 6d.

The service at Chagford is proving such a success that the inhabitants of Moretonhampstead are also asking for connection with Exeter, some twelve miles distant.

There is an ancient and disused parish pump at Llangollen which is once again serving the community by carrying the time-tables of the motor buses. A third Clarkson steamer will come into service here on June 23.

Winchester is likely to serve as a centre for a large amount of traffic in the near future. Several routes are under consideration by a local syndicate. One is from Petersfield via Alresford and the picturesque valley of the Itchen ; another is from St. Cross; and a third includes King's Worthy and Twyford.

A gentleman has written to the" Oxford Times "suggesting that, because the local tram company has to pave and keep in order the parts of the roads occupied by the rails at a cost of 4400 per annum, it would be good policy to charge every motor bus a fee of jo per annum for wear and tear of the roads. He further proposes that licenses should be granted for six months only. His signature of " Fair Play" does not accord with his quaint proposals.

We made reference last week to the various services at Hove and Brighton. There seems some underground influence at work, which benefits one company at the expense of another. If the Hove Town Council licenses the vehicles of one company, common sense would dictate a similar policy for all applicants, other conditions being equal, as they arc at Hove. Competition is incentive to improvements which are beneficial to the community, and, whilst holding no brief for any particular organisation, we think that a progressive company is having its energies cramped by local wire-pulling.

We can foresee multitudes of trouble coming along in the very near future lor one of the London companies running motor buses. When a vehicle pulls up at a stopping place, the driver naturally places the change-speed lever in the neutral, but nearly always omits to throttle down the gas supply. This is bad enough for the engine and has an annoying effect upon passengers' nerves, for the engine is thus set to run at full power on no load, and must necessarily create vibration from end to end of the vehicle. If the stoppage is of any duration the engine must overheat, and unnecessary wear is put on the bearings which could not be calculated in any designer's ideas. The practice is so persistent on a particular route that we should imagine the various drivers have never received proper instructions from headquarters. We would recommend chief engineers to give this matter their most careful attention. Very careful supervision is needed to secure proper attention to driving, regulations, and we suggest the aid of an inspector, whose sole duty consists in keeping touch with such irregularities. • Blackpool has a well-organised service of char-h-bancs running to Lancaster via Singleton and Garstang.

The statutory meeting of the shareholders of the London District Motor Bus Co., Ltd., was held on the 16th inst.

We understand that the long-talked-of route between Redruth and Falmouth will be inaugurated at an early date by the G.W. Railway.

As showing the satisfactoryresults obtained from their other routes, the G.W. Railway has decided to start a motor bus service between Abergavenny, Crickhowell, and Brecon on July 1, to carry both passengers and mails. A time-sheet will be issued shortly.

A driver of one of the Isle of Wight motor buses has been summoned for exceeding the legal limit. For the defence the point was raised that the prosecution was not valid, for the reason that the defendant was not warned that proceedings would be taken against him, under section 9 of the Act, when stopped by the police. This view was upheld by the magistrates, and the Bench dismissed the case.

The L. and NAV. Railway and the G.W. Railway are joining forces for linking up Leominster anti Knighton via Kington and Presteign by motor buses. Such a service will confer immense benefits on the various villages en route, but will be more particularly appreciated by the inhabitants of Knighton and Presteign. Although the distance by road is only six miles, it is half a day's journey by rail, over some forty miles, involving several changes and long waits.

The G.W. Railway has a service of buses at Stroud (Gloucestershire) and recently requested permission from the Stroud Urban District Couficil to hang tablets on lampposts to indicate the stopping places. The Urban District Council wants to charge one sovereign per post per annum. This is pretty prejudice, and as showing the ideas of the members of this little council, one member suggested in the course of the discussion to put unrolled stones down on the road and thus drive the new vehicles away, whilst another wished a special levy on the bus owners for road watering. As the railway company is the largest ratepayer in the district this seems like adding insult to injury.

The directors of the North British Railway were hoping to open up yesterday (Wednesday, 21st) a new service between North Berwick and AberladyviA Dirleton and Gullane. A large number of golf links lie along the line of route, and it is largely to meet the convenience of golfers that the vehicles have been provided. It is thought that for the present two chassis fitted with char-A-banc bodies, each to carry 24 persons, will suffice for all the traffic offering. These will provide for 12 journeys daily in each direction. The vehicles have been constructed by the Mo-Car Syndicate, Ltd., of Paisley, are fitted with their well-known Arrol-Johnston engine, and have been tested to carry a full load up a gradient of 1 in 6. Portable roofs are carried, together with side storm curtains, thus affording the fullest protection under bad weather conditions.

The motor industry is indebted to Mr. Bonar Law for the following apt argument which he recently used in the House of Commons, in committee, in the course of his speech regarding the opposition of the Newcastle-on-Tyne Corporation to the N.E. Railway Bill for powers to run motor omnibuses. He said :—" Over and over again witnesses representing municipal owners of trainways have appeared before the Traffic Commission, and. have given evidence to the effect that, owing to the greater cheapness of tramways, motor omnibuses cannot compete with them. Yet, when a railway company wants to run motor omnibuses, as in this case, the municipalities say just the opposite." Small wonder that the committee rejected the amendment requiring railway companies to get permission Worn local authorities, and the House thereby set its imprimatur upon the motor omnibus as a serious competitor with electric traction.