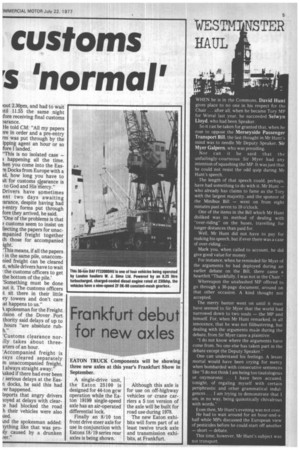 Page 7, 22nd July 1977 — Frankfurt debut for new axles
Close
Noticed an error?
If you've noticed an error in this article please click here to report it so we can fix it.

EATON TRUCK Components will be three new axles at this year's Frankfurt September. • showing Show in A single-drive unit, the Eaton 25100 is designed for 44-ton gcw operation while the Eaton 19199 single-speed axle has an air-operated differential lock.

Finally an 8/10 ton front drive steer axle for use in conjunction with Eatons 18/19 series rear axles is being shown. Although this axle is for use on off-highway vehicles or crane carriers a 5 ton version of the axle will be built for road use during 1978.

The new Eaton exhibits will form part of at least twelve truck axle and transmission exhibits, at Frankfurt.