'FATHER AND SON' APPEAL IN EDINBURGH 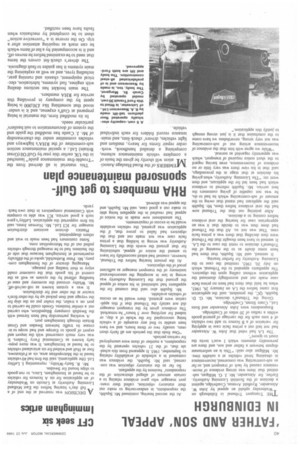 'THE Transport Tribunal in Edinburgh on Wednesday upheld an appeal by John W. Alexander, Ryefield Avenue, Coatbridge, against a decision of the Scottish Licensing Authority. Earlier, for Alexander, Mr. J. G. Milligan, submitted that there was strong evidence of inconvenience caused by lack of transport and, so far as sub-contracting was concerned, inconvenience in obtaining hired vehicles at a suitable time. Mr. Milligan also said: "This is an unfortunate dispute between a father and son, and there are personality elements which I won't invite the court to ignore".

The LA had ruled that John W. Alexander had not laid out a prima facie case in applying for variation of a B licence to add two vehicles of 4 tons each for the carriage of general goods within a radius of 20 miles of Coatbridge.

Giving the Tribunal's decision, Mr. G. D. Squibb, QC, the president, said the application first came before the LA on January 26, 1965, when he held that there had been no prima facie case made out and accordingly dismissed the application without calling upon the objectors. The appellants appealed to the Tribunal, which on July 20, 1965, remitted the case to the Licensing Authority for further hearing.

It seemed, said Mr. Squibb, that there had been some doubt as to the meaning of the Tribunal's decision to remit the case to the LA. It seemed to have been thought that the Tribunal were then deciding that there was a prima facie case. That was not so. All that the Tribunal had done then was to decide that it was an appropriate case for hearing the oral evidence before coming to a decision.

After pointing out that the Tribunal now had the oral evidence before them, Mr. Squibb said the applicant had stated that owing to the amount of sub-contracting which he had to do, he was not capable of giving customers the best service. Mr. Squibb referred to evidence which had been led for the applicant, and then went on: "The Licensing Authority, when giving his decision at that stage in the proceedings, said that in his view there was very little or no evidence of inconvenience, even having regard to the short notice required of transport, which was apparently regarded as normal.

"While we agree with him that the evidence of inconvenience arising out of sub-contracting was not very strong, nevertheless we have come to the conclusion that it is just strong enough to justify this application." At the second hearing, continued Mr. Squibb, the respondents, in endeavouring to make out their statutory objection, called their transport manager who gave evidence relating to a certain amount of alleged abstraction of the respondents' business by the appellant.

So far as the statutory objection was concerned, said Mr. Squibb, the evidence was contained in a schedule of availability relating to September, 1965. It appeared from this schedule that, of the 21 vehicles operated by the respondents, a number of them were unemployed for various periods.

"One finds that the periods are all fairly short ones, usually two or three hours, and we have been unable to find any example of a vehicle being unoccupied for the whole of a day, or indeed for anything over 5 hours" he remarked. The evidence given by the transport manager did not satisfy the Tribunal that if this application were granted, there would be an excess of vehicles available.

Mr. Squibb also said that counsel for the appellants had submitted in his notice of appeal the ground that the Licensing Authority was wrong in law in accepting the uncorroborated testimony of the transport manager as sufficient proof of the objections.

At the present hearing before the Tribunal, however, counsel had asked successfully for leave to amend the notice of appeal, substituting for that ground the words that the Licensing Authority was wrong in holding that a prima facie case was not made out and that the objectors had failed to prove that, if the application was granted, the vehicles available would be in excess of requirements.

The amendment now made in the notice of appeal had resulted in the appellant being able to make out a good case, said Mr. Squibb, and the appeal was allowed.