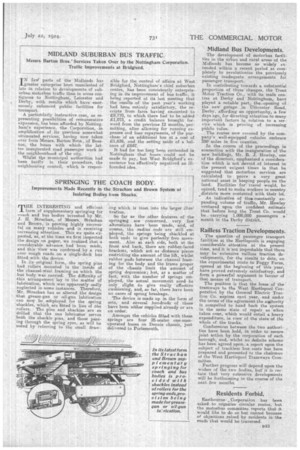 IN fevii" parts of the Midlands has greater enterprise been manifested of late in relation to developments of suburban motorbus traffic than in areas contiguous to Nottingham, Leicester and Derby, with results which have enormously enhanced public facilities for transport.

A particularly instructive case, as representing possibilities of remunerative expansion, has been afforded by Nottingbanes experience, the Corporation, in amplification of its previous somewhat attenuated services, having now taken over from Messrs. Barton Bros., of Beeston, the buses with which the latter inaugurated road passenger work in he neighbourhood of the city. , Whilst tbe municipal authorities had been tardly in their procedure, the neighbouring council, which is respon sible for the control of afrairs at West Bridgford, Nottingham's chief suburban centre, has been consistently enterprising in its improvement of bus traffic, it being reported at it last meeting that the results of the past year's working had been entirely satisfactory, the receipts from fares having amounted to £9,770, to which there had to be added E1,073, a credit balance brought forward from the previous 12 months, permitting, after allowing for running expenses and loan' repayments, of the purchase of an additional bus at a cost of £1,639, and the setting aside of a balance of £647.

• It had for too long been contended in Nottingham that buses could not be made to pay, but West Bridgford's experience has effectively negatived an illfounded idea.

The development of motorbus facilities in the urban and rural areas of the Midlands has become so widely extended within a recent period as completely to revolutionize the previously existing inadequate arrangements for passenger transport.

In contributing towards a substantial proportion of these changes, the Trent Motor Traction Co., with its main centres at Derby and Nottingham, have played a notable part, the. opening of the new garage in Uttoxeter Road, Derby, affording an opportunity, a few days ago, for directing attention to many important factors in relation to a service which is proving of increasing public value.

In the course of the proceedings in connection with the inauguration of the new buildings, Mr. R. J. Rowley, one of the directors, emphasized a consideration which is not devoid of interest in the present exigent times in that he suggested that motorbus services are calculated to prove a very great national asset in keeping people on the land. Facilities for travel would, he opined, tend to make workers in country districts more contented with their lot.

As indicative of the& constantly expanding volume of traffic, Mr. Howley ventured upon the confident estimate that before long the Trent Co. would be carrying 1,000,000 passengers a ' month in the Derby district.

. The question of passenger transport facilities at the Hartlepools is engaging considerable attention at the present time, and it is not improbable that there may be extensive Tailless traction developments, for the results to date, on the experimental route to Foggy Furze, opened at the beginning of this year, have proved extremely satisfactory, and form a powerful argument in favour of that means of transport.

The position is that the lease of the tramways to the West Hartlepool Corporation by the General Electric Traction Co. expires next year, and under the terms of the agreement the authority is compelled to hand back the system in the same state of repair as when taken over, which would entail a heavy expenditure in view of the state of the whole of the tracks.

Conferences between the two authorities have been held, in order to secure joint action by the corporation of each borough, and, whilst no definite scheme has been agreed upon, a report upon the subject of trackless bus costs has been prepared and presented to the chairman of the West Hartlepool Tramways Committee.

Further progress will depend upon the wishes of the two bodies, but it is certain that very extensive developments will be fortbeemin2 in the course of the next few months.

Eastbourne, Corporation has been asked to organize circular routes, but the motorbus committee reports that it would like to do so but cannot because or objections raised by residents in the roads that would be traversed.