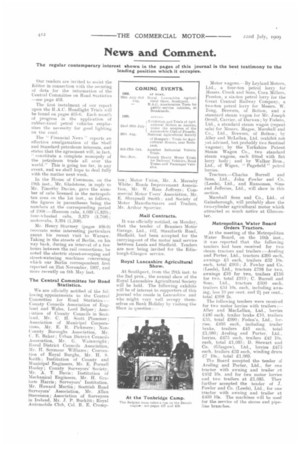 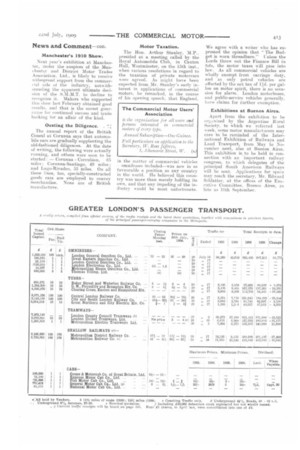 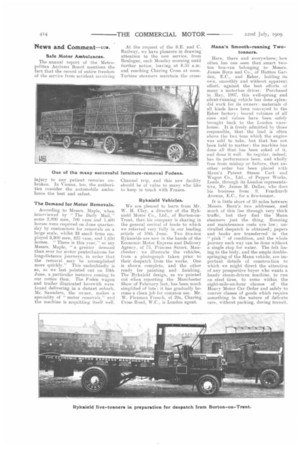 The regular contemporary interest shown in the pages of this journal is the best testimony to the leading position which it occupies.

Our readers are invited to assist the Editor in connection with the securing of data for the information of the Central Committee on Road Statistics —see page 403.

The first instalment of our report upon the R.A.C. Headlight Trials will be found on pages 403-6. Each month of progress in the application of rubber-tired petrol vehicles emphasizes the necessity for good lighting, on the road.

The " Financial News '' reports an effective amalgamation of the Shell and Standard petroleum interests, and states that the agreement will, in fact, " constitute a complete monopoly of the petroleum trade all over the world." This is going too far, in any event, and we shall hope to deal fully with the matter next week.

Mr. Henry Sturmey (pages 408-9) recounts some interesting particulars anent his recent visit to Warsaw. Taking in the streets of Berlin, on his way back, during an interval of a few hours between the rail connections, he noted the electric street-sweeping and street-watering machines concerning which our Berlin correspondent first reported on 21st November, 1907, and more recently on 6th May last.

The Central Committee for Road Statistics.

It was officially notified, on Monday, that the tender of Benniers Motor Garage, Ltd., 442, Staniforth Road, Sheffield, had been accepted for the carrying-out of the motor mail service between Leeds and Sheffield. Tenders are now being invited for the Edinburgh-Glasgow service.

At Southport, from the 29th inst. to the 2nd prox., the annual show of the Royal Lancashire Agricultural Society will be held. The following exhibits will be of interest to supporters of this journal who reside in Lancashire. and who might very well occupy themselves on Bank Holiday by visiting the Show in question : Motor wagons.--By Leyland Motors, Ltd., a four-ton petrol lorry for Messrs. Crook and Sons, Corn Millers, Preston, a six-ton petrol lorry for the Great Central Railway Company, a two-ton petrol lorry for Messrs. W. Tong, Brewers, of Bolton, and a standard steam wagon for Mr. Joseph Orrell, Carrier, of Darwen; by Fod ens, Ltd., a standard steam wagon (repeat sale) for Messrs. Magee, Marshall and

Tractors.—Charles Burrell and Sons, Ltd., John Fowler and Co. (Leeds), Ltd., and Ransomes, Sims and Jefferies, Ltd., will show in this section.

Marshall Sons and Co., Ltd., of Gainsborough, will probably show the two-cylinder agricultural motor which attracted so touch notice at Gloucester.

Next year's exhibition at Manchester, under the auspices of the Manchester and District Motor Trades Association, Ltd.„ is likely to receive widespread support from the conamer al side of the industry, notwithstanding the apparent ultimate decision of the S.M.M.T. to decline to recognize it. Makers who supported this show last February obtained good results, and that is the surest guarantee for continued success and trade backing for an affair of the kind.

The annual report of the British Consul at Corunna says that automobile cars are gradually supplanting the old-fashioned diligenees. At the date of writing, the following were actually running, and others were soon to be started : Corunna Corcubion, 65 miles; Corunna-Santiago, 49 miles; and Lugo-Rivadeo, 55 miles. On all these lines, too, specially-constructed goods cars are employed to convey merchandise. None are of British manufacture. Motor Taxation.

The Hon. Arthur Stanley, M.P., presided at a meeting called by the Royal Automobile Club, in Caxton Hall, Westminster, on the 15th inst., when various resolutions in regard to the taxation of private motorcars were agreed. As might have been expected from Mr. Stanley's early interest in applications of commercial motors, he remarked, in the course of his opening speech, that England, in the matter of commercial vehicles

omnibuses included-was now in as favourable a position as any country in the world. fife believed this country was more than merely holding its own, and that any impeding of the indnstry would be most unfortunate. We agree with a writer who has expressed the opinion that "The Budget is worn threadbare." Unless the Lords throw out the Finance Bill in tot o, the motor taxes will pass into law. As all commercial vehicles are wholly exempt from carriage duty, and as only petrol vehicles are affected by the net tax of 1d. per gallon on motor spirit, there is no occasion for alarm. London motorbuses, and public-service vehicles generally, have claims for further exemption_

Apart from the exhibition to be organized by the Argentine Rural Society, to which we referred last week, some motor manufacturers may care to he reminded of the International Exhibition of Railways and Land Transport, from May to November next, also at Buenos Aires. This exhibition is to be held in connection with an important railway congress, to which delegates of the principal South American Railways will be sent. Applications for space may reach the secretary, Mr. Edward Schlatter, at the offices of the Executive Committee, Buenos Aires, as late as 10th September.

The annual report of the Metropolitan Asylums Board mentions the fact that the record of entire freedom of the service from accident involving injury to any patient remains unbroken. In Vienna, too, the authorities consider the automobile ambulance the best and safest.

The Demand for Motor Removals.

According to Messrs. Maple, when interviewed by " The Daily Mail," some 2,800 men, 700 vans and 1,400 horses were required on June quarterday by contractors for removals on a large scale, whilst 33 small firms employed 3,300 men, 825 vans, and 1,050 horses. " There is this year," so say Messrs. Maple, " a greater demand than ever for motor pantechnicons for long-distance journeys, in order that the removal may be accomplished more quickly." This undoubtedly is so, as we last pointed out on 10th June, a particular instance coming to our notice then. The Foden wagon and trailer illustrated herewith were found delivering in a distant suburb. Mr. Saunders, the owner, makes a speciality of "motor removals," and the machine is acquitting itself well.

At the request of the S.E. and C. Railway, we have pleasure in drawing attention to the new service, from Boulogne, each Monday morning until further notice, leaving at 8.50 a.m. and reaching Charing Cross at noon. Turbine steamers maintain the cross Channel trip, and this new facility should be of value to many who like to keep in touch with France.

We are pleased to learn from Mr. W. H. Clay, a director of the Ryknield Motor Co., Ltd., of Burton-onTrent, that his company is sharing in the general revival of trade to which we referred very fully in our leading article of 10th June. Two five-ton Ryknields are now in the hands of the Economic Motor Express and Delivery Agency, of 75, Princess Street, Manchester: we illustrate the vehicles, from a photograph taken prior to their despatch from the works. One is shown complete, and the other ready for painting and finishing. The Ryknield design, as we pointed out when reporting the Manchester Show of February last, has been much simplified of late; it has gradually become a clean job for common use. Mr. W. Flexman French, of 29a, Charing Cross Road, W.C., is London agent. Mann's Smooth-running Twotonners.

Here, there and everywhere; how often has one .seen that smart twoton box-van belonging to Messrs. James Burn and Co., of Hatton Garden, E.C., and Esher, holding its own, smoothly and without apparent effort, against the best efforts of many a motorbus driver. Purchased in May, 1907, this well-sprung and silent-running vehicle has done splendid work for its owners: materials of all kinds have been conveyed to the Esher factory; bound volumes of all sizes and values have been safely brought back to the London warehouse. It is freely admitted by those responsible, that the load is often above the two tons which the engine was sold to take, but that has not been held to matter : the machine has done all that has been asked of it, and done it well. So regular, indeed, has its performance been, and wholly free from mishap or failure, that another order has been placed with Mann's Patent Steam Cart and Wagon Co., Ltd., of Pepper Works, Leeds, through its London representative, Mr. James M. Dallas, who does his business from 9, Fenchurch Avenue, E.C., for a five-tonner.

It is little short of 20 miles between Messrs. Burn's two addresses, and much of this lies through very thick traffic, but they find the Mann steamers just the thing. Running and maintenance costs are low ; unrivalled despatch is obtained; papers and books are transferred in the " pink " of condition, and the whole journey each way can be done without a single stop for water. The felt lining to the body, and the ample doublespringing of the Mann vehicle, are important details of construction to which we might direct the attention of any prospective buyer who wants a handy steam-driven machine, to run on steel tires, to come within the eight-mile-an-hour clauses of the Heavy Motor Car Order and safely to convey classes of goods which require something in the nature of delicate care, without packing, during transit.