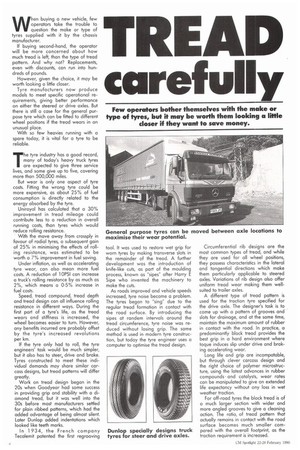 Few operators bother themselves with the make or type of tyres, but it may be worth them looking a little closer if they want to save money.

When buying a new vehicle, few operators take the trouble to question the make or type of tyres supplied with it by the chassis manufacturer.

If buying second-hand, the operator will be more concerned about how much tread is left, than the type of tread pattern. And why not? Replacements, even with discounts, can run into hundreds of pounds.

However, given the choice, it may be worth looking a little closer.

Tyre manufacturers now produce models to meet specific operational requirements, giving better performance on either the steered or drive axles. But there is still a case for the general purpose tyre which can be fitted to different wheel positions if the tread wears in an unusual place.

With so few heavies running with a spare today, it is vital for a tyre to be reliable.

The tyre industry has a good record, many of today's heavy truck tyres are expected to give three service lives, and some give up to five, covering more than 500,000 miles.

But wear is only one aspect of tyre costs. Fitting the wrong tyre could be more expensive, as about 25% of fuel consumption is directly related to the energy absorbed by the tyre.

Uniroyal has calculated that a 30% improvement in tread mileage could contribute less to a reduction in overall running costs, than tyres which would reduce rolling resistance.

With the move away from crossply in favour of radial tyres, a subsequent gain of 25% in minimising the effects of rolling resistance, was estimated to be worth a 7% improvement in fuel saving.

Under inflation, as well as accelerating tyre wear, can also mean more fuel costs. A reduction of lOPSI can increase a truck's rolling resistance by as much as 2%, which means a 0.5% increase in fuel costs.

Speed, tread compound, tread depth and tread design can all influence rolling resistance in different ways. During the first part of a tyre's life, as the tread wears and stiffness is increased, the wheel becomes easier to turn. However, any benefits incurred are probably offset by the tyre's increased revolutions per km.

If the tyre only had to roll, the lyre engineers' task would be much simpler, but it also has to steer, drive and brake. Tyres constructed to meet these individual demands may share similar carcass designs, but tread patterns will differ greatly.

Work on tread design began in the 20s when Goodyear had some success in providing grip and stability with a diamond tread, but it was well into the 30s before most manufacturers settled for plain ribbed patterns, which had the added advantage of being almost silent. Later Dunlop added indentations which looked like teeth marks.

In 1934, the French company Tecalemit patented the first regrooving tool. It was used to restore wet grip for worn tyres by making transverse slots in the remainder of the tread. A further development was the introduction of knife-like cuts, as part of the moulding process, known as "sipes" after Harry E Sipe who invented the machinery to make the cuts.

As roads improved and vehicle speeds increased, tyre noise became a problem. The tyres began to "sing" due to the regular tread formation in contact with the road surface. By introducing the sipes at randem intervals around the tread circumference, tyre noise was reduced without losing grip. The same method is used in modern tyre construction, but today the tyre engineer uses a computer to optimise the tread design. Circumferential rib designs are the most common types of tread, and while they are used for all wheel positions, they possess characteristics in the lateral and tangential directions which make them particularly applicable to steered axles. Variations of rib design also offer uniform tread wear making them wellsuited to trailer axles.

A different type of tread pattern is used for the traction tyre specified for the drive axle. The designer's task is to come up with a pattern of grooves and slots for drainage, and at the same time, maintain the maximum amount of rubber in contact with the road. In practice, a predominantly block tread provides the best grip in a hard environment where toque induces slip under drive and braking accelerating wear.

Long life and grip are incompatable, but through clever carcass design and the right choice of polymer microstructure, using the latest advances in rubber compounds and catalysts, wear rates can be manipulated to give an extended life expectancy without any loss in wet weather traction.

For off-road tyres the block tread is of a much larger section with wider and more angled grooves to give a cleaning action. The ratio, of tread pattern that actually remains in contact with the road surface becomes much smaller compared with the overall footprint, as the traction requirement is increased.