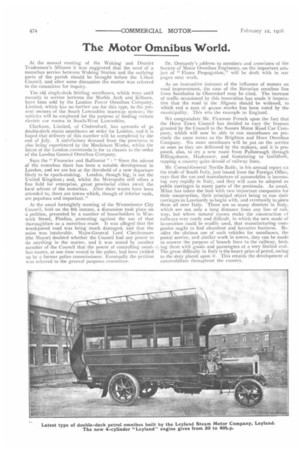 Page 2, 22nd February 1906 — The Motor Omnibus World.
Close
Noticed an error?
If you've noticed an error in this article please click here to report it so we can fix it.
Keywords : London General Omnibus Company, Woking, Brighton & Hove

At the annual meeting of the Woking and District Tradesmen's Alliance it was suggested that the need of a motorbus service between Woking Station and the outlying parts of the parish should be brought before the Urban Council, and after some discussion the matter was referred to the committee for inquiry.

The old single-deck Stirling omnibuses, which were until recently in service between the Marble Arch and Kilburn, have been sold by the London Power Omnibus Company, Limited, which has no further use for this type, to the present owners of the South Lancashire tramway system vehicles will be employed for the purpose of feeding certain electric car routes in South-West Lancashire.

Clarkson, Limited, of Chelmsford, has upwards of so double-deck steam omnibuses on order for London, and it is hoped that delivery of this number will be completed by the end of July. A satisfactory demand from the provinces is also being experienced by the Moulsham Works, whilst the latest of the London commands is for 12 chassis to the order of the London General Omnibus Company.

Says the " Financier and Bullionist " : " Since the advent of the motorbus there has been -a notable development in London, and we are but at the threshold of a new departure Likely to be epoch-making. London, though big, is not the United Kingdom ; and, whilst the Metropolis still offers a fine field for enterprise, great provincial cities await the local advent of the motorbus. After their wants have been attended to, there are towns which, though of inferior rank, are populous and important."

At the usual fortnightly meeting of the Westminster City Council, held on the 8th instant, a discussion took place on a petition, presented by a number of householders in 'Warwick Street, Pimlico, protesting against the use of that thoroughfare as a motorbus route. It was alleged that the wood-payed road was being much damaged, and that the noise was intolerable. Major-General Lord Cheylesmore (the Mayor) doubted whether the Council had any power to do anything in the matter, and it was stated by another member of the Council that the power of controlling omnibus routes, at one time vested in the police, had been yielded up by a former police commissioner. Eventually the petition was referred to the general purposes committee.

Dr. Ormandy's address to members and associates of the Society of Motor Omnibus Engineers, on the important subject of " Flame Propagation," will be dealt with in our pages next week.

As an instructive instance of the influence of motors on road improvement, the case of the Bavarian omnibus line from Sonthofen to Oberstdorf may be cited. The increase of traffic occasioned by this innovation has made it imperative that the road in the Aligaeu should be widened, to which end a sum of 40,000 marks has been voted by the municipality. This sets the example to England.

We congratulate Mr. Flexman French upon the fact that the Hove Town Council has decided to vary the licenses granted by the Council to the Sussex Motor Road Car Company, which will now be able to run motorbuses on precisely the same terms as the Brighton and Hove Omnibus Company. Six more omnibuses will be put on the service as soon as they are delivered by the makers, and it is proposed, also, to try a new route from Pulborough through Billingshurst, Hazlemere, and Godalming to Guildford, tapping a country quite devoid of railway lines.

Mr. Consul-General Neville Rolfe, in his annual report on the trade of South Italy, just issued from the Foreign Office, says that the use and manufacture of automobiles is increasing very rapidly in Italy, and they will soon be adopted as public carriages in many parts of the peninsula. As usual, Milan has taken the lead with two important companies for their construction, their principal object being to run their carriages in Lombardy to begin with, and eventually to place them all over Italy. There are so many districts in Italy, which are not only a long distance from any line of railway, but where natural causes make the construction ef railways very costly and difficult, in which the new mode of locomotion could be readily used, that manufacturing companies ought to find abundant and lucrative business. Besides the obvious use of such vehicles for omnibuses, the postal service, and similar work in towns, they can be mock to answer the purpose of branch lines to the railway, feeding them with goods and passengers at a very limited cost. The great difficulty in Italy is the heavy price of petrol, owing to the duly placed upon it. This retards the development of automobilism throughout the country.