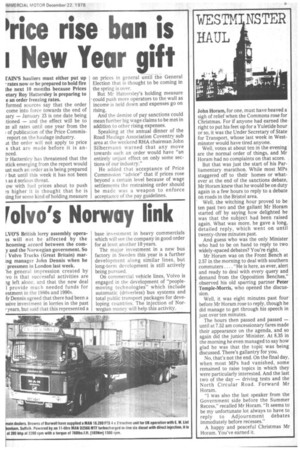 John Horam, for one, must have heaved a sigh of relief when the Commons rose for Christmas. For if anyone had earned the right to put his feet up for a Yuletide hour or so, it was the Under Secretary of State for Transport, whose last week in Westminster would have tired anyone.

Well, votes at about ten in the evening are the normal order of things, and Mr Horam had no complaints on that score.

But that was just the start of his Parliamentary marathon. While most MPs staggered off to their homes or whatever at the end of the sanctions debate, Mr Horam knew that he would be on duty again in a few hours to reply to a debate on roads in the Bristol area.

Well, the witching hour proved to be ten past two and the gallant Mr Horam started off by saying how delighted he was that the subject had been raised again. What was more, he gave a long, detailed reply, which went on until twenty-three minutes past.

And guess who was the only Minister who had to be on hand to reply to two widely-spaced debates? You're right.

Mr Horam was on the Front Bench at 2.57 in the morning to deal with southern commuters .... "He is here, as ever, alert and ready to deal with every query and demand from the Opposition Benches," observed his old sparring partner Peter Temple-Morris, who opened the discussion.

Well, it was eight minutes past four before Mr Horam rose to reply, though he did manage to get through his speech in just over ten minutes.

The hours then passed and passed — until at 7.52 am concessionary fares made their appearance on the agenda, and so again did the junior Minister. At 8.35 in the morning he even managed to say how glad he was that the topic was being discussed. There's gallantry for you.

No, that's not the end. On the final day, when most MPs had vanished, some remained to raise topics in which they were particularly interested. And the last two of the day — driving tests and the North Circular Road. Forward Mr Horam.

"I was also the last speaker from the Government side before the Summer Recess," recalled Mr Horam. "It seems to be my unfortunate lot always to have to reply to Adjournment debates immediately before recesses."

A happy and peaceful Christmas Mr Horam. You've earned it.