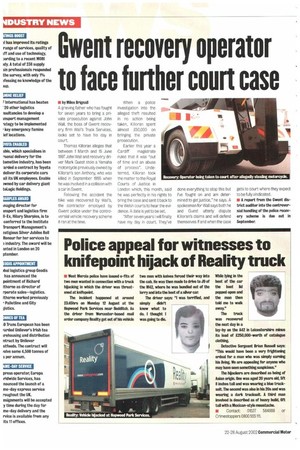 • by Miles Brignall A grieving father who has fought for seven years to bring a private prosecution against John Wall, the boss of Gwent recovery firm Wall's Truck Services, looks set to have his day in court.

Thomas Killoran alleges that between 1 March and 15 June 1997 John Wall and recovery driver Mark Guest stole a Yamaha motorcycle previously owned by Killoran's son Anthony, who was killed in September 1995 when he was involved in a collision with a car in Gwent.

Following the accident the hike was recovered by Wall's, the contractor employed by Gwent police under the controversial vehicle recovery scheme it ran at the time. When a police investigation into the alleged theft resulted in no action being taken, Killoran spent almost £50,000 on bringing the private prosecution.

Earlier this year a Cardiff magistrate ruled that it was out of time and an abuse of process". Undeterred, Killoran took the matter to the Royal Courts of Justice in London which, this month, said he was perfectly in his rights to bring the ease and sent It back to the Welsh courts to hear the evidence. A date is yet to be set.

"After seven years I will finally have my day in court. They've done everything to stop this but I've fought on and am determined to get justice," he says. A spokesman for Wall says both he and Guest utterly dispute Killoran's claims and will defend themselves if and when the case gets to court where they expect to be fully vindicated.

• A report from the Gwent district auditor into the controversial handling of the police recovery scheme is due out in September.