From beer to eternity 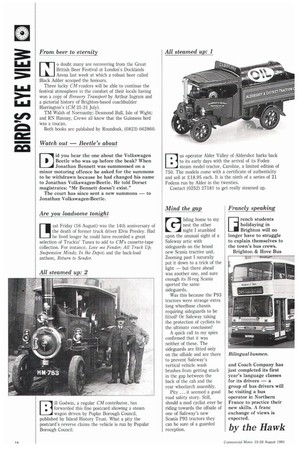 o doubt many are recovering from the Great British Beer Festival at London's Docklands Arena last week at which a robust beer called Black Adder scooped the honours.

Three lucky CM readers will be able to continue the festival atmosphere in the comfort of their locals having won a copy of Brewery Transport by Arthur Ingram and a pictorial history of Brighton-based coachbuilder Harrington's (CM 25-31 July).

TM Walsh of Nonnanby; Desmond Bull, Isle of Wight; and RN Hannay, Crewe all knew that the Guinness bird was a toucan.

Watch out — Beetle's about

id you hear the one about the Volkswagen Beetle who was up before the beak? When Jonathan Bennett was summonsed on a minor motoring offence he asked for the summons to be withdrawn because he had changed his name to Jonathan Volkswagen-Beetle. He told Dorset magistrates: "Mr Bennett doesn't exist."

The court has since sent a new summons — to Jonathan Volkswagen-Beetle.

1 ast Friday (16 August) was the 14th anniversary of the death of former truck driver Elvis Presley. Had he lived longer he could have recorded a great selection of Truckin' Tunes to add to CM's cassette-tape collection. For instance, Love me Fender; All Truck Up; Suspension Minds; In the Depot; and the back-load anthem, Return to Sender.

All steamed up: I

us operator Alder Valley of Aldershot harks back to its early days with the arrival of its Foden steam model tractor, Caroline, a limited edition of 750. The models come with a certificate of authenticity and sell at E18.95 each. It is the ninth of a series of 21 Fodens run by Alder in the twenties.

liding home to my nest the other night I stumbled upon the unusual sight of a Safeway artic with sideguards on the brand new Scania tractive unit. Zooming past I naturally put it down to a trick of the light — but there ahead was another one, and sure enough its H-reg Scania sported the same sideguards.

Was this because the P93 tractors were strange extra long wheelbase chassis requiring sideguards to be fitted? Or Safeway taking the protection of cyclists to the ultimate conclusion?

A quick call to my spies confirmed that it was neither of these. The sideguards are fitted only on the offside and are there to prevent Safeway's vertical vehicle wash brushes from getting stuck in the gap between the back of the cab and the rear wheelarch assembly.

Pity ... it seemed a good road safety story. Still, should a mad cyclist ever be riding towards the offside of one of Safeway's new Scania P93 tractors they can be sure of a guarded reception.

ljrench students holidaying in Brighton will no longer have to struggle to explain themselves to the town's bus crews.

Brighton & Hove Bus and Coach Company has just completed its first year's language classes for its drivers — a group of bus drivers will be visiting a bus operator in Northern France to practice their new skills. A franc exchange of views is expected.