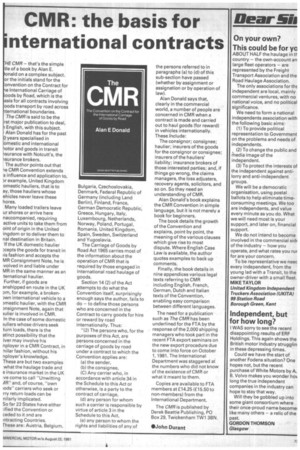 Page 51, 22nd August 1981 — On your own?
Close
Noticed an error?
If you've noticed an error in this article please click here to report it so we can fix it.
Keywords : Independent, Haulage, Road Haulage Association, Democratic Party, Politics

This could be for pa

ABOUT HALF the haulage in a country — the own-account an large fleet operators — are represented by the Freight Transport Association and the Road Haulage Association.

The only associations for thE independent are local, mainly commercial ventures, with no national voice, and no political significance.

We need to form a national independents association with the following basic aims: (1) To provide political representation to Government on the problems and needs of independents.

(2) To change the public and media image of the independent.

(3) To protect the interests of the independent against antilorry and anti-independent groups.

We will be a democratic organisation, using postal ballots to help eliminate timeconsuming meetings. We too are independents, and value every minute as you do. What we will need most is your support, and later on, financial support.

We do not intend to become involved in the commercial sick of the industry — how you operate, and what rates you rur for are your concern.

To be representative we neec every independent, from the young lad with a Transit, to the owner-driver with a small fleet. MIKE TAYLOR United Kingdom independent Truckers Association (UKITA) 99 Station Road Borough Green, Kent