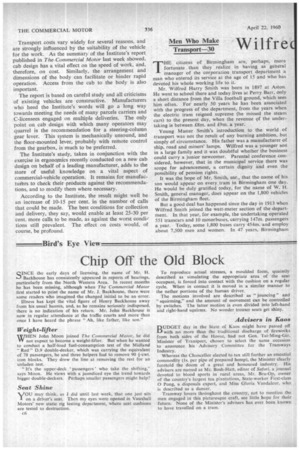 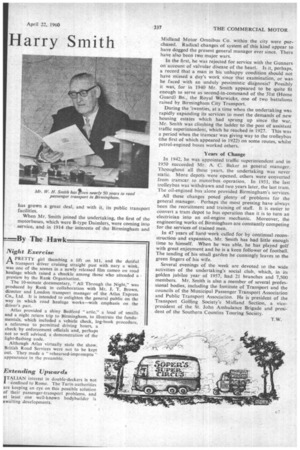 Page 42, 22nd April 1960 — W i 1 fr e
Close
Noticed an error?
If you've noticed an error in this article please click here to report it so we can fix it.
Keywords : Light Rail, Tram, Trolleybus, Birmingham, Nottingham Corporation Tramways

HE citizens of Birmingham are, perhaps, more fortunate than they realize in having as general manager of the corporation transport department a man who entered its service at the age of 15 and who has devoted his whole working life to it.

Mr. Wilfred Harry Smith was born in 1897 at Aston. He went to school there and today lives at Perry Barr, only a short distance from the Villa football ground, which sees him often. For nearly 50 years he has been associated with the progress of the department, from the years when the electric tram reigned supreme (he missed the steam cars) to the present day, when the revenue of the undertaking is between am. and £9m. a year.

Young Master Smith's introduction to the world of transport was not the result of any burning ambition, but simply of circumstance. His father was a manufacturer of ship, road and miners' lamps. Wilfred was a younger son in a large family and it was doubtful whether the business could carry a junior newcomer. Parental conference considered, however, that in the municipal service there was scope for advancement, a certain dignity and even the possibility, of pension rights.

It was the hope of Mr. Smith, snr., that the name of his son would appear on every, tram in Birmingham one day. He Would be duly gratified today, for the name of W. H. Smith, general manager, does appear on the 1,800 vehicles of the Birmingham fleet.

But a good deal has happened since the day in 1913 when Wilfred Smith joined the watt-meter section of the department. In that year, for example, the undertaking operated 551 tramcars and 10 motorbuses, carrying 147m. passengers a year. Today, some 1,800 buses carry 454m. and employ about 7,500 men and women. In 47 years, Birmingham

has grown a great deal, and with it, its public transport facilities.

When Mr. Smith joined the undertaking, the first of the motorbuses, which were B-type Daimlers, were coming into service, and in 1914 the interests of the Birmingham and Midland Motor Omnibus Co. within the city were purchased. Radical changes of system of this kind appear to have dogged the present general manager ever since. There have also been two major wars.

In the first, he was rejected for service with the Gunners on account of valvular disease of the heart. Is it, perhaps, a record that a man in his unhappy condition should not have missed a day's work since that examination, or was he faced with an unduly pessimistic diagnosis? Possibly it was, for in 1940 Mr. Smith appeared to be quite fit enough to serve as second-in-command of the 31st (Home Guard) Bn., the Royal Warwicks, one a two battalions raised by Birmingham City Transport.

During the 'twenties, at a time when the undertaking was rapidly expanding its services to meet the demands of new housing estates which had sprung up since the war, Mr. Smith was climbing the ladder to the post of assistant traffic superintendent, which he reached in 1927. This was a period when the tramcar was giving way to the trolleybus (the first of which appeared in 1922) on some routes, whilst petrol-engined buses worked others.

Years of Change In 1942, he was appointed traffic superintendent and in 1950. succeeded Mr. A. C. Baker as general manager. Throughout all these .years, the undertaking was never static. More depots were opened, others were converted from tramcar to motorbus operation. In 1951, the last trolleybus was withdrawn and two years later, the last tram. The oil-engined bus alone provided Birmingham's services.

All these changes posed plenty of problems for the general manager. Perhaps the most pressing have always been the recruitment and training of staff. It is easier to convert a tram depot to bus operation than it is to turn an electrician into an oil-engine mechanic. Moreover, the engineering works of Birmingham are constantly competing for the services of trained men.

In 47 years of hard work called for by continual reconstruction and expansion, Mr. Smith has had little enough time to himself. When he was able, he has played golf with great enjoyment and he is a keen follower of football. The tending of his small garden he cunningly leaves to the green fingers of his wife.