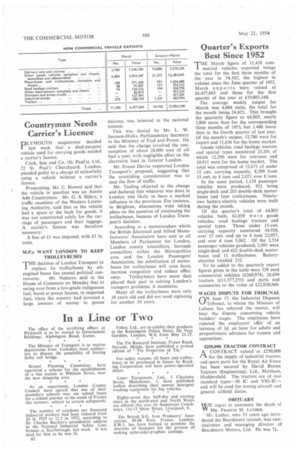 Page 36, 21th May 1954 — Countryman Needs Carrier's Licence
Close
Noticed an error?
If you've noticed an error in this article please click here to report it so we can fix it.
Keywords : Sustainable Transport, Trolleybus, Bus, Tram

Prosecuting, Mr. C. Howett said that the vehicle in question was an Austin A40 Countryman. Mr. G. S. Sidery, a traffic examiner of the Western Licensing Authority, said that as the vehicle had a space at the back for goods, it was not constructed solely for the carriage of passengers and their luggage. A carrier's licence was therefore necessary.

M.P.s WANT LONDON TO KEEP TROLLEYBUSES THE decision of London Transport to replace its trolleybuses by oilengined buses has caused political con troversy. Mr. Nabarro said in the Ilouse of Commons on Monday that to swing over from a low-grade indigenous fuel, burnt at power houses, to imported fuel, when the country had invested a large amount of money in power stations, was inimical to the national interest.

This was denied by Mr. L. W. Joynson-Hicks, Parliamentary Secretary to the Ministry of Fuel and Power. He said that the change involved the consumption of about 28,000 tons of oil fuel a year, with negligible effect on the electricity load in Greater London.

Mr. Ernest Davies supported London Transport's proposal, suggesting that the overriding consideration was to ease the flow of traffic.

Mr. Teeling objected to the change and declared that whatever was done in London was likely to have a marked influence in the provinces. For instance, in Brighton, discussions were taking place on the question of continuing the trolleybuses, because of London Transport's decision.

According to a memorandum which the British Electrical and Allied Manufacturers' Association have sent to all Members of Parliament for London, London county councillors, borough councillors within the Metropolitan area and the London Passengers' Association, the substitution of motorbuses for trolleybuses will raise fares, increase congestion and reduce effici ency. Trolleybuscs have more than played their part in solving London's transport problems, it maintains, Many of the trolleybuses were only 10 years old and did not need replacing for another 10 years.