THE C.M.U.A. PARADE AT NOTTINGHAM. 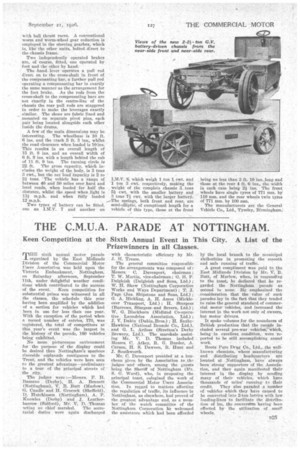 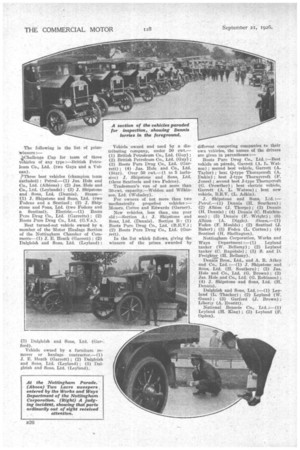 Page 43, 21st September 1926 — THE C.M.U.A. PARADE AT NOTTINGHAM.
Close
Noticed an error?
If you've noticed an error in this article please click here to report it so we can fix it.
Keywords : Leyland Motors, Edwin Foden, Sons & Co., Sandbach, Albion Motors, Nottingham

Keen Competition at the Sixth Annual Event in This City. A List of the Prizewinners in all Classes.

TUEsixth annual motor parade organized by the East Midlands Division of the Commercial Motor risers Association was held upon the Victoria Embankment, Nottingham, on Saturday afternoon, September 11th, under delightful weather conditions which contributed to the success of the event. Keen competition for substantial prizes was witnessed in all the classes, the schedule this year having been amplified by the addition of a 'section for vehicles which had been in use for less than one year. With the exception of the period when a record number of entries, 170, was registered, the total of competitors at this year's event was the largest in the history of the parade, 161) vehicles being exhibited.

No more picturesque environment for the purpose of the display could be desired than Nottingham's spacious riverside esplanade contiguous to the Trent, and the vehicles were here seen to the greatest advantage--preliminary • to a tour of the principal streets of • the city. • The judges were :—Messrs. P. H. Ilassano (Derby), H. A. Bennett (Nottingham), V. B. Butt (Marlow), 'Gk. Candle and H. Grotmek (Sheffield), D. Hutchinson (Nottingham), A. P. Knowles (Derby) and J. Leatherbarrow (Salford), Mr. V. D. Thomas

Mr. C. Davenport presided at a luncheon given by the Assoeiation to OP judges and others; among the guests being the Sheriff of Nottingham (Mr. S. G. Ward), who, in proposing the principal toast, eulogized the work of the Commercial Motor Users Association. r In regard to Matters affecting the regulatipn of traffic; its influence in Nottingham, as elsewhere, had proved of the greatest advantage and, as a member of the watch committee of the Nottingham Corporation he welcomed the assistance which had been afforded

by the local branch to the municipal Athorities in promoting the smooth and safe running of traffic.

A great compliment was paid to the East Midlands Division by Mr. V. B. Butt, of Marlow, when, in responding to the toast, he declared that he regarded the Nottingham parade as second to none. He emphasised the -.consideration that the value of such parades lay in the fact that they tended to raise the general standard of commercial motor vehicles, and increased the interest in the work not only of owners, but motor drivers.

It spoke volumes for the soundness of British production that the -parade included several pre-war vehieleshich, being in excellent condition, were reported to be still accomplishing sound work.

wellknown chemists, whose Manufacturing and distributing headquarters are located at Nottingham, have always been strong supporters of the Association, and they again manifested their interest in the display by sending many of their vehicles, which have thousands of miles' running ta their credit. They also paraded a number of vehicles which they have caused to ha converted into 2-ton lorries with low loading-lines to facilitate the distribution of ice, the conversion having been effected by the utilization of small wheels.

4Challenge _Cup for team of three vehicles of any type :—British Petroleum Co., Ltd. (two Guys and a Vulcan).

For owners of not more than two mechanically propelled vehicles :— Messrs. Cottee and Edwards (Garner).

In the list which fellows, giving the winners of the prises awarded by