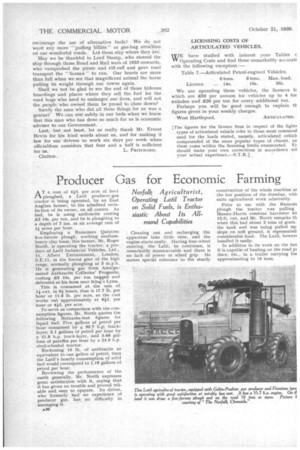 Norfolk Agriculturist, Operating Laid Tractor on Solid Fuels, is Enthusiastic About Its All round Capabilities

AT a cost of qd. per acre of land ploughed, a Latil producer:zas tractor is being operated, by an East Anglian farmer, to the admitted satisfaction of its owner, on all counts. As fuel, he is using anthracite costing £3 10s. psi ton, and he is ploughing to a depth of 7 ins, at an average rate of

This is consumed at the rate of

Reckoning 15 lb. of anthracite as equivalent to one gallon of petrol, then the Latil's hourly consumption of solid fuel would correspond to 1.18 gallons of petrol per hour. Reviewing the performance of the outfit generally, Mr. North expresses great satisfaction with it, saying that it has given no trouble and proved reliable and easy to operate. Its driver, who formerly had no experience of producer gas, has no difficulty in managing it.

A30 Cleaning out and recharging the apparatus take little time, and the engine starts easily. Having four-wheel steering, the Latil, he continues, is remarkably manceuvrable and there is no lack of power or wheel grip. He makes special reference to the sturdy construction of the whole machine as the low position of the drawbar, whii suits agricultural work admirably.

Prior to use with the Ransomn plough the tractor was pulling Massey-Harris combine harvester wi 12-ft. cut, and Mr. North remarks th when this had about 2 tons of grain the tank and was being pulled up slope on soft ground, it represented considerable load. The Latil, howevi handled it easily.

In addition to its work on the fan it is capable of hauling on the road pi duce, etc., in a trailer carrying Ion approximating to 10 tons,