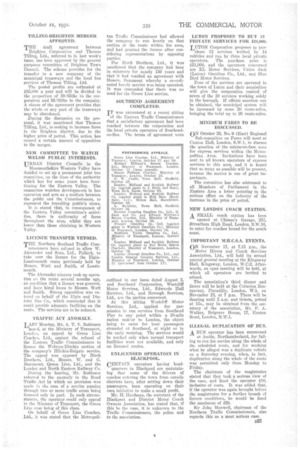 Page 61, 21st October 1932 — PH...LING-BRIGHTON MERGER APPROVED.
Close
Noticed an error?
If you've noticed an error in this article please click here to report it so we can fix it.
Keywords : Thomas Tilling, Brighton, Tram, Business / Finance

THE draft agreement between Brighton Corporation and Thomas Tilling, Ltd., referred to in last week's issue, has been approved by the general purposes committee of Brighton Town Council. The scheme provides for the transfer to a new company of the municipal tramways and the local bus services of Thomas Tilling, Ltd.

The pooled profits are estimated at £85,000 a year and will be divided in the proportion of 30/85ths to the corporation and 55/85ths to the company. A clause of the agreement provides that the whole or any part of the tramways may be abandoned.

Duriag the discussion on the proposal, it was' mentioned that Thomas Tilling, Ltd., is seeking to increase fares in the Brighton district, due to the higher price of petrol. This action has caused a certain amount of opposition to the merger.