Converting a Fleet to Oil Engines 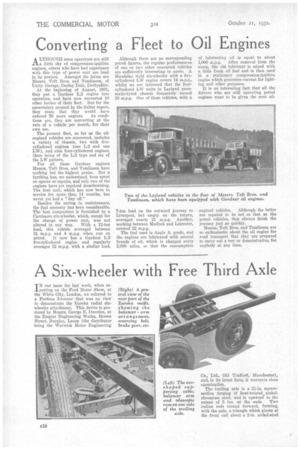 Page 44, 21st October 1932 — Converting a Fleet to Oil Engines
Close
Noticed an error?
If you've noticed an error in this article please click here to report it so we can fix it.

ALTIIOUGH some operators are still a little shy of compression-ignition engines, others who have had experience with this type of power unit are loud in its praises. Amongst the latter are Messrs. Toft Bros. and Tomlinson, of Unity Garage, Darley Dale, Derbyshire.

At the beginning of August, 1921, they put a Gardner L.2 engine into operation, and have now converted 10 other lorries of their fleet. But for the uncertainty created by the Salter report, they state that they would have

ordered 20 more engines. As conditions are, they are converting at the rate of a vehicle per month, for their

The present fleet, so far as the oilengined vehicles are concerned, includes a variety of chassis, two with fivecylindered engines (one L.2 and one LW), and nine four-cylindered engines, three being of the L.2 type and six of the LW pattern.

For all these Gardner engines Messrs. Toft Bros. and Tomlinson have nothing hut the highest praise. Not a farthing has we understand, been spent on spares or repairs, and only two of the engines have yet required decarbonizing. The first unit, which has now been in service for more than 14 months, has never yet had a "day off."

Besides the saving in maintenance, the fuel economy has been considerable. The best comparison is furnished by a Carrimore six-wheeler, which, except for the change of Dower unit, was not altered in any way. With a 12-ton load, this vehicle averaged between m.p.g, and 4 m.p.g. when run on petrol. It now has a Gardner L.2 five-cylindered engine and regularly averages 12 m.p.g. with a similar load.

Although there are no corresponding petrol figures, the regular performances of one or two other converted vehicles are sufficiently interesting to quote. A Maudslay rigid six-wheeler with a fivecylindered LW engine covers 14 m.p.g., whilst we are informed that the fourcylindered LW units in Leyland pneumatic-tyred chassis frequently exceed 20 m.p.g. One of these vehicles, with a 7-ton load on the outward journey to Liverpool, but empty on the return, averaged nearly 21 m.p.g. Another, working between Matlock and Leicester, covered 22 m.p.g.

The fuel used is Anglo A. grade, and the engines are lubricated with several brands of oil, which is changed every 2,000 miles, so that the consumption of lubricating oil is equal to about 1,000 m.p.g. After removal from the sump, the old lubricant is mixed with a little fresh oil fuel and is then used in a stationary compression-ignition engine which generates current for lighting and other purposes.

It is an interesting fact that all the drivers who are still operating petrol engines want to be given the next oil engined vehicles. Although the latter are reputed to be not so fast as the petrol vehicles, they always finish the journey just as quickly.

Messrs. Toft Bros. and Tomlinson are so enthusiastic about the oil engine for road transport that they are prepared to carry out a test or demonstration for anybody at any time.