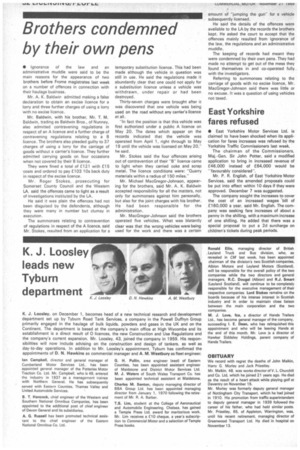 K. J. Loosley, on December 1, becomes head of a new technical research and development department set up by Tyburn Road Tank Services, a company in the Powell Duffryn Group primarily engaged in the haulage of bulk liquids, powders and gases in the UK and on the Continent. The department is based at the company's main office at High Wycombe and its establishment is a direct result of 0 licences, the new Construction and Use Regulations and the company's current expansion. Mr. Loosley, 43, joined the company in 1959. His responsibilities will now include advising on the construction and design of tankers, as well as day-to-day operations. In addition to Mr. Loosley's appointment, Tyburn has confirmed the appointments of D. N. Hawkins as commercial manager and A. M. Westbury as fleet engineer.

Ian Campbell. director and general manager of Cumberland Motor Services Ltd., has been appointed general manager of the Potteries Motor Traction Co. Ltd. Mr. Campbell, who is 49, entered the industry in 1937 as a management trainee with Northern General. He has subsequently served with Eastern Counties, Thames Val* and United Automobile Services, B. T. Hancock, chief engineer of the Western and Southern National Omnibus Companies, has been appointed to the additional post of chief engineer of Devon General and its subsidiaries.

Charles M. Senton, deputy managing director of BBA Group Ltd. has been appointed managing director from January 1, 1970 following the retirement of Mr. R. A. Barber, T.S. Lim, student at the College of Aeronautical and Automobile Engineering. Chelsea, has gained a Temple Press Ltd. award for meritorious work. Mr. Um receives a £10 cheque, a year's subscription to Commercia/ Motor and a selection of Temple Press books Ronald Ellis, managing director of British Leyland Truck and Bus division, who, as revealed in CM last week, has been appointed chairman of the division's two Scottish companies, Albion Motors and Leyland Motors (Scotland), will be responsible for the overall policy of the two companies while the two directors and general managers. R.C. Dougal (Albion) and R.J. Smart {Leyland Scotland), will continue to be completely responsible for the executive management of their respective companies. Lord Stokes remains on the boards because of his intense interest in Scottish industry and in order to maintain close liaison between the main corporation and the two companies.

We record with regret the deaths of John Malkin. Harry G. Morley and Jack Priestley.

Mr. Malkin, 48. was works director of V. L. Churchill and.Co. Ltd, which he joined 21 years ago. He died as the result of a heart attack while playing golf at Daventry on November 16.

Mr. Morley was formerly deputy general manager of Nottingham City Transport, which he had joined in 1910. His promotion from traffic superintendent to deputy general manager in 1939 followed the career of his father, who had held similar posts. Mr. Priestley. 65. of Appleton. Warrington, was, until his recent retirement, managing director of Greenwood Transport Ltd. He died in hospital on November 13