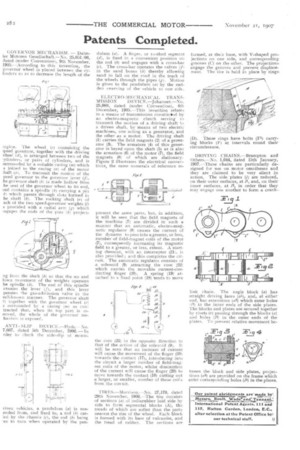 Page 20, 21st November 1907 — Patents Completed.
Close
Noticed an error?
If you've noticed an error in this article please click here to report it so we can fix it.
Keywords : Electric Motors, Armature, G

.—According to this invention, e governor wheel is placed between the cylinders so as to decrease the length of the !n,gine. The wheel (c) containing the ;peed governor, together with the driving vheel Id), is arranged between two of the ylinclers, or pairs of cylinders, and is narrounded by a suitable casing (m) which joined to the casing el of the motor haft (al, To transmit the motion of the peed governor to the governor lever (f), he governor shaft (b) is made hollow from he seat of the governor wheel to its end, ind contains a spindle (h) carrying a pin k) which passes through slots formed in he shaft (19. The rocking shaft Is) of ach of the two speed-governor weights (1) s provided with a radial arm (g) which !ngages the ends of the pins (le) project ng from the shaft (1) so that the up and lawn movement of the weights operates he spindle lh). The end of this spindle .ctuates -the lever (/), and this lever ,porates the gas-admission valve in the trell-known manner. The governor shaft ti together with the governor wheel lc) 3 surrounded by a casing (m) so contructed that, when its lop part is reroved, the whole of the governor mehanism is exposed. ANTISLIP DEVICE.—Hyde. No. dated ated 5th December, 1906. —In

rder check the side-slip of motor

riven vehicles a pendulum (a) is susended from, and fixed to, a rod (b) cared by the chassis (e), the rod (t being 7ee to turn when operated by the pen dulum (a). A finger, or toothed segment fixed (d), is xed in a convenient position on r a the rod (b) and engages with cross-bar (e). The cross-bar operates the valves (f the J in e sand boxes (h) thereby allowing sand to fall on the road in the track of the wheels through the pipes (g). Motion is given to the pendulum (a) by the sudden swerving of the vehicle to one side.

ELECTR 0 -M ECH ANI CAL TRANS. MISSION DEVICE.—Johannet.—No. 2-5,988, dated (under Convention), 4th December, 1905.—This invention relates to a means of transmission constit, wtd by an electro-magnetic clutch serving to transmit the motion of a driving shaft to a driven shaft, by means of two electric machines, one acting as a generator, and the other as a motor. The driving shaft (1) carries the field magnets (2) of a generator (3). The armature (4) of this generator is keyed upon the shaft (5) as is also the armature (6) of the motor (7), the field magnets (8) of which are stationary. Figure 2 illustrates the electrical connections, the same numerals of reference re present the same parts, but, in addition, it will be seen that the field magnets of the machine (7) are divided in such a manner that an automatic, electro-magnetic regulator (9) causes the current of the dynamo to pass into a greater, or less, number of field-magnet coils of the motor (7), consequently increasing its magnetic field to a greater, or less, extent. A starting rheostat, with an interrupter (211, i:, also provided ; and this completes the circuit. The automatic regulator consists of a solenoid (9) attracting the core (22) which carries the movable current-conducting finger (20). A spring (19) attached to a fixed point (18) tends to move the co (22) in the opposite direction to that of re the action of the solenoid (9). Itwill be seen that an increase of current movement of the finger will cause the mover (20; towards the contact (17), introducing into m whilst o the circuit a larger number field-magnet coils of the motor, hilst diminution of the current will cause the finger (20) to move towards the contact (10) cutting out a larger, or smaller, number of these coils from the circuit.

TTRES.—Morrison.—No. 27,179, dated 29th November, 1906.—The tire consists of sections (a) of incliarubber laid side by side to form segmental blocks (A), the treads of which are softer than the parts block nearest the rim of the wheel. Each ock s formed with its base of vulcanite, and the tread of rubber. The sections are formed,at their base, with V-shaped projections on one side, and corresponding. grooves (C) on the other. The projections. engage the grooves and prevent displacement. The tire is held in place by rings (D). These rings have bolts (F1) carrying blocks (E) at intervals round their circumference.

DRIVING CHAINS.—Brampton and Others.--No. 1,044, dated 15th January, 1907.--.These chains are particularly de-signed for use on motor omnibuses and they are claimed to be very silent in action. The side plates (1( are reduced, on their outer surfaces, at /1, and, on theirinner surfaces, at /2, in order that they may engage one another to form a crank link chain. The angle block (a) has straight driving faces (al), and, at either end, has extensions (a3) which enter holes /3.) in the inner ends of the side plates. a together The blocks and plates are secured togeer r) passing by rivets ( passi through the blocks (a) and holes (/2) in the outer ends of the plates. To prevent relative movement be tween the block and side plates, projections (a3) are provided on the frame which enter corresponding holes (/5) in the plates.