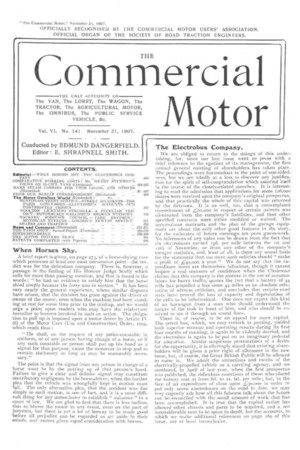 Page 1, 21st November 1907 — When Horses Shy.
Close
Noticed an error?
If you've noticed an error in this article please click here to report it so we can fix it.

A brief report is given, on page 73u Di a horse-shying case which possesses at least one most uncommon point—the ver-diet was for the defendant company. There is, however, a passage in the finding of His Honour Judge Scully which calls for more than passing mention, and that is found in the words : " he had no evidence to satisfy him that the horse shied simply because the lorry was in motion." It has been very nearly the general experience, where similar disputes have arisen, that the decision has gone against the driver or owner of the motor, even when the machine had been standing at rest for some time prior to the mishap, and we would .urge a point upon readers who may have the misfortune hereafter to become involved in such an action. The obligation to pull up is imposed upon a motor driver by Article IV (6) of the Motor Cars (Use and Construction) Order, 1904, .which reads thus : ".lie shall, on the request of any police-constable in uniform, or of any person having charge of a horse, or if any such constable or person shall put up his hand as a signal for that purpose, cause the motorcar to stop and to remain stationary so long as may be reasonably necessary."

The point is that the signal from any person in charge of a 'horse must be by the putting up of that person's hand. Failure to give a clear and definite signal may constitute .00ntributory negligence by the horse-driver, when the further plea that the vehicle was wrongfully kept in motion must fail, The only alternative plea, that the accident was due simply to such motion, is one of fact, and it is a most difficult thing for any motor_hater to establish " nuisance " in a court of law, We are glad to find that there is less inclination to blame the motor in any event, even on the part of jurymen, but there is yet a lot of leeway to be made good 'before all prejudice can be regarded as set aside in their minds, and motors given equal consideration with horses. We are obliged to return to the doings of this undertaking, for, since our last issue went to press with a brief reference to the egotism of its management, the first annual general meeting of shareholders has taken place. The proceedings were harmonious to the point of one-sidedness, but we are wholly at a loss to discover any justification for the spirit of self-congratulation which asserted itself in the course of the closely-related speeches. It is interesting to read the admission that applications for some 126,000 shares were received upon the company's original prospectus, and that practically the whole of this capital was returned by the directors.It is as well, too, that a contemplated commitment of L20,000 in respect of certain patents was eliminated from the company's liabilities, and that other specified contracts were either modified or waived. The accumulator contracts and the plan of the garage. equipment are about the only other good features in the story, for the estimates of future earnings are pure guess-work. No inferences of any value can be drawn from the fact that six electrobuses earned r5d. per mile between the 1st and 12th of November, or from any other of the company's meagre statistics, and, least of ail, is there any sound basis for the statement that moo snore such vehicles should " snake a profit of L40,000 .a year." We do not say that the expenditure items are themselves fallacious, though it cannot inspire a real measure of confidence when the Chairman claims that this company is the pioneer in the use of accumulators for heavy traffic, quotes the fact that a battery of 44 cells has propelled a bus some 44 miles as an absolute refutation of adverse criticism, and concludes that. certain road tests have proved the loss of capacity and depreciation of the cells to be infinitesimal. One does not expect this kind of an harangue from a man who should understand the nature of the task in front of him, and who Should be resolved to see it through on sound lines. There is, of course, to be an appeal for more capital. The petrol bus, which, we may remark in passing, yielded both superior revenue and operating results during its first four months of running, is again to be violently-decried, and the electrobus is again to be put on an imaginary pedestal for adoration. Amidst suspicious protestations of a desire for the opportunity, it is alluringly stated that existing shareholders will be given a prior right of allotment in the new issue, but, of course, the Great British Public will be allowed to come in. We admit the attractions and merits of the electrically-propelled vehicle as a carrying agency, and we combated, in April of lastyear, when the first prospectus was published, the ridiculous assertions of those who placed the battery cost at from 8d. to Is. 6d, per mile; but, in the face of an expenditure of close upon £30,000 in order to put only seven electrobuses on the road to date, we may very cogently ask how all this fulsome talk about the future can be reconciled with the small amount of work that has been accomplished. It is true that the capital outlay has allowed other chassis and parts to be acquired, and a net inconsiderable sum to be spent in depbt, but the accounts, to which we make additional references on page 269 of this issue, are at least inconclusive.