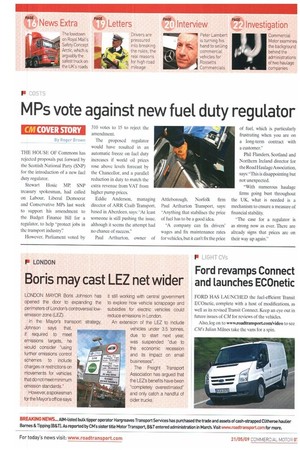 CM COVER STORY By Roger Brown THE HOUSE OF Commons has rejected proposals put forward by the Scottish National Party (SNP) for the introduction of a new fuel duty regulator.

Stewart Hosie MR SNP treasury spokesman, had called on Labour, Liberal Democrat and Conservative MPs last week to support his amendment to the Budget Finance Bill for a regulator, to help "protect jobs in the transport industry'?

However. Parliament voted by 310 votes to 15 to reject the amendment.

The proposed regulator would have resulted in an automatic freeze on fuel duty increases if world oil prices rose above levels forecast by the Chancellor, and a parallel reduction in duty to match the extra revenue from VAT from higher pump prices.

Eddie Anderson, managing director of ARR Craib Transport, based in Aberdeen, says: "At least someone is still pushing the issue, although it seems the attempt had no chance of success."

Paul A rthurton. owner of Affieborough, Norfolk firm Paul Arthurton Transport, says: "Anything that stabilises the price of fuel has to be a good idea.

"A company can fix drivers' wages and fix maintenance rates for vehicles, but it can't fix the price of fuel, which is particularly frustrating when you are on a long-term contract with a customer."

Phil Flanders, Scotland and Northern Ireland director for the Road Haulage Association, says: "This is disappointing but not unexpected.

"With numerous haulage firms going bust throughout the UK, what is needed is a mechanism to ensure a measure of financial stability.

"The case for a regulator is as strong now as ever. There are already signs that prices are on their way up again."