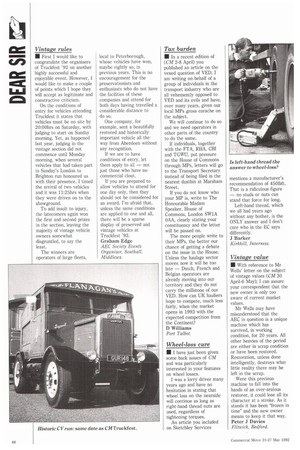 Page 50, 21st May 1992 — Tax burden
Close
Noticed an error?
If you've noticed an error in this article please click here to report it so we can fix it.

ill In a recent edition of (CM 2-8 April) you published an article on the vexed question of VED. I am writing on behalf of a group of individuals in the transport industry who are all vehemently opposed to VED and its evils and have, over many years, given our local MPs gross earache on the subject.

We will continue to do so and we need operators in other parts of the country to do the same.

If individuals, together with the FTA, RHA, CBI and TGWU, put pressure on the House of Commons through MPs, letters will go to the Transport Secretary instead of being filed in the nearest dustbin at Marsham Street.

If you do not know who your MP is, write to The Honourable Madam Speaker, House of Commons, London SW1A OAA, clearly stating your constituency and the letter will be passed on.

The more people write to their MPs, the better our chance of getting a debate on the issue in the House. Unless the haulage sector moves now it will be too late — Dutch, French and Belgian operators are already moving into our territory and they do not carry the millstone of our VED. How can UK hauliers hope to compete, much less fairly, when the market opens in 1993 with the expected competition from the Continent?