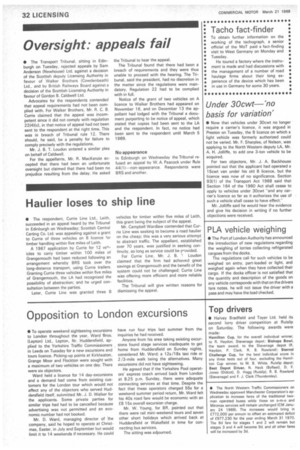 Advocates for the respondents contended that appeal requirements had not been complied with. For Walker Brothers, Mr. R. C. B Currie claimed that the appeal was incompetent since it did not comply with regulation 22(4)(c), in that notice of appeal had not been sent to the respondent at the right time. This was in breach of Tribunal rule 12. There should, he said, be a penalty for failure to comply precisely with the regulations.

Mr. J. B. T. Loudon entered a similar plea on behalf of Caldwell.

The Tribunal found that there had been a breach of requirements and they were thus unable to proceed with the hearing. The Tribunal, said the president, had no discretion in the matter since the regulations were mandatory. Regulation 22 had to be complied with in full.

In Edinburgh on Wednesday the Tribunal refused an appeal by W. A. Peacock under Rule 44(1 I—non-appearance. Respondents were B RS and another.