Error Led to Vehicle's Use Without Licence 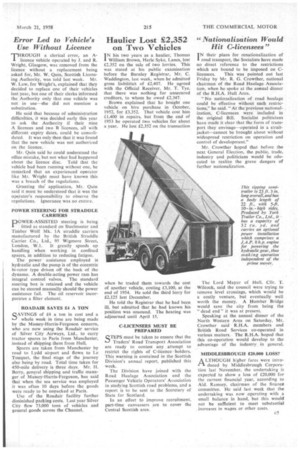 Page 41, 21st March 1958 — Error Led to Vehicle's Use Without Licence
Close
Noticed an error?
If you've noticed an error in this article please click here to report it so we can fix it.
Keywords : Agricultural Machinery, Cranes, Straddle Carrier, Massey Ferguson

'THROUGH a clerical error, an AL licence vehicle operated by I. and R. Wright, Glasgow, was removed from the licence without a replacement being asked for, Mr. W. Quin, Scottish Licensing Authority, was told last week. Mr. W. Law, for Wright's, explained that they decided to replace one of their vehicles last year, but one of their clerks informed the Authority only that one vehicle was not in use—she did not mention a substitution.

He said that because of administration difficulties, it was decided early this year to ask the Authority if their nine A licences and two B licences, all with different 'expiry dates, could be consolidated. It was only then that it was found that the new vehicle was not authorized on the licence.

Mr. Quin said he could understand the office mistake, but not what had happened about the licence disc. Told that the vehicle had been running without one, he remarked that an experienced operator like Mr. Wright must have known this was a breach of the regulations.

Granting the application, Mr. Quin said it must be understood that it was the operator's responsibility to observe the regulations. Ignorance was no excuse.

The power assistance employed is hydraulic and the pump is of the eccentric hi-rotor type driven off the back of the dynamo. A double-acting power ram has integral control valves. The standard steering box is retained and the vehicle can be steered manually should the power assistance fail. The oil reservoir incorporates a filter element.

SAVINGS of £4 a ton in cost and a whole week in time are being made by the Massey-Harris-Ferguson concern, who are now using the Roadair Service of Silver City Airways, Ltd., to carry tractor spares to Paris from Manchester, instead of shipping them from Hull.

Spares are taken from Manchester by road to Lydd airport and flown to Le Touquet, the final stage of the journey also being by road. Total time taken for 450-mile delivery is three days. Mr. H. Berry, general shipping and traffic manager of Massey-Harris-Ferguson, has said that when the sea service was employed it was often 10 days before the goods were ready to be unpacked at Paris.

Use of the Roadair facility further diminished packing costs. Last year Silver City flew 73,000 tons of vehicles and general goods across the Channel.