THE RAILWAYS AND ROAD TRANSPORT POWERS. 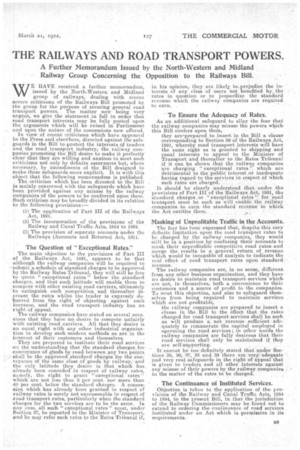 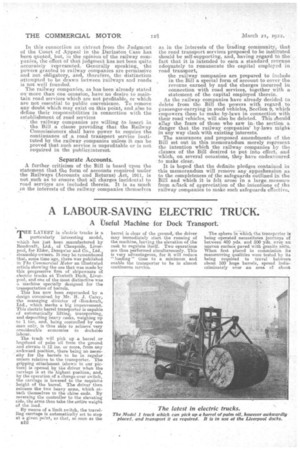 Page 11, 21st March 1922 — THE RAILWAYS AND ROAD TRANSPORT POWERS.
Close
Noticed an error?
If you've noticed an error in this article please click here to report it so we can fix it.

A Further Memorandum Issued by the North-Western and Midland Railway Group Concerning the Opposition to the Railways Bill.

WE HAVE received, a further memorandum, issued by the North-Western. and Midland group of railways, dealing with recent severe criticisms of the Railways Bill promoted by the group for the purpose of securing general road transport powers. The matter now being very urgent, we give the statement in full in order that road transport interests may be fully posted upon

i the arguments which will be raised n Parliament and upon the nature of the concessions now offered. In view of recent criticisms which have appeared in•the. Press and elsewhere, directed against the safeguards in the Bill to protect the interests Of traders and the road transport industry, the railway companies promoting the Bill desire to make it perfectly clear that they are willing and anxious to meet such criticisms not only by definite assurances but where necessary, by amendments of the Bill designed to make those safeguards more explicit. It is with this 'object that the following memorandum is published. • The criticism which has been directed to the Bill is mainly concerned with the safeguards which have been provided against any misuse by the railway companies of the powers to be conferred upon them. Such criticism may be broadly divided in its relation to the following provisions:— • (1) The application of Part III of the Railways Act, 1921.

(2) The incorporation of the provisions of the Railway and Canal Traffic Acts, 1854to 1894.

(3) The provision of separate accounts under the Railways (Accounts and Returns) Act, Ian.

The Question of "Exceptional Rates."

The main objection to the provisions of Part III of the Railways Act, 1921, appears to be that although the railway companies will be required to submit a schedule of standard charges be be approved by the Railway Rates Tribunal, they will still be free to quote "'exceptional rates " below the standard charges, and that such latitude will enable them to ,compete with other existing road carriers, ultimately to extinguish such competition and thereafter increase the rates whilst the trader is expressly debarred from the right of objectingagainst such increase, and the road transport industry has no right of appeal.

The railway companies have stated on several oeca• sions that they have no desire to compete unfairly with existing road.carrier. All that they desire is an equal right with any other industrial organization to develop such modern methods as are in the interest of their customers and themselves.

They are prepared to institute their road services oa the understanding that the standard charges for conveyance of god's by road between any two points shall be the approved standard charges for the Conveyance, of the same class of goods by railway, and the only latitude they desire is that which has already been conceded in respect of railway rates, nsniely, the right to grant "exceptional rates which are not less than 5 per cent, nor more than 40 per cent. below the standard charges. A concession which has already been granted in respect of railway rates is surely not unreasonablc in respect of road transport rates, particularly when the standard charges for the two services are to be the same. In any case, all such "exceptional rates " must, under Section 37, be reported to the Minister of Trananort, and he may refer such rates to the Rates Tribunal if in his opinion, they are likely to.prejudice the interests of any class of users not benefited by, the rates in question or to jeoparaize the standard revenue which the railway companies are required to earn.

' To Ensure the Adequacy of Rates.

As an additional safeguard to allay the fear that the railway companies may misuse the powers which this Bill confers upon them, they areeprepared to insert in the Bill a clause corresponding to Section 39 of the Railways Act, 1921, whereby road transport interests will have the same right as is granted to shipping and canal interests to appeal to the Minister of Transport and thereafter to the Rates Tribunal if it can be shown that the railway companies are charging " exceptional , rates ' which are, detrimental to the publie interest or inadequate having regard to the services in respect of which such rates 'are `charged;

It should be clearly understood that under the provisions of Part III-of the Railways Act, 1921, the standard charges:or ," exceptional rates " for road transport must be such as will enable the railway companies to earn the standard revenue to which the Act entitles them.

Masking of Unprofitable Traffic in the Accounts.

The fear has been expressed that, despite this very definite limitation: upon the road tranSport rates to be charged by the railway companies, they would still be in a position by confusing their accounts to mask their unprofitable competitive road rates, and merge the results. in a• general return of revenue which would he incapable of analysis to indicate the real effect of road transport rates upon standard, revenue.

The railway companies are, in no sense, different from any other business organization, and they have no desire to maintain road transport services which are riot, in themselves, both a convenience to their customers and a source of profit to the companies. To meet this objection, and also to safeguard themselves from being required to maintain services which are not profitable, • the railway companies are prepared to insert a clause in the Bill to the effect that the rates charged for road transport services shall be such as will produce a net revenue • sufficient quately to remunerate the capital employed in operating the road services ; in other words the railway companies are fully desirous that their road services shall only be maintained if they, are self-supporting. •

It' • cannot be too definitely stated that under Sections 35, 36, 37, 38 and 39 there are very adequate and very real safeguards in the right of appeal that is given to traders and all other interests against any misuse of their powers by the railway companies in the matter of the rates to be charged.

The Continuance of Instituted Services.

-Objection is takes to the application of the provisions of the Railway and Canal Traffic Acts, 1854 to .1894, to the present Bill, in that the jurisdiction of the Railway Commissioners may he found not to extend to ordering the continuance of road services instituted under an Act which i5. permissive in its requirements..

In this connection an e.ktract from the Judgment of the Court of Appeal in the Darlastou Case has been quoted, but, in the opinion of the railway coen panics, the effect of that judgment has not been quite accurately represented. Generally speaking, the powers granted to railway companies are permissive and not obligatory, and, therefore, the distinction attempted to be drawn between railways and roads is not well founded.

The railway companies, as has been already stated en -more than one occasion, have no desire to maintain road services which are not profitable, or which are not essential to public convenience. To remove any doubt which may exist on this point, and. also to define their responsibilities in connection with the establishment of road services

the railway companies are willing to insert in the Bill a clause providing that the Railway CommissionerS shall have power to require the continuance of a road transport service instituted by the railway companies unless it can be proved that such service is unprofitable or is not required in the publiceinterest.

A further criticism of the Bill is based upon the statement that the form of accounts required under the Railways (Accounts and Returns) Act i 1911, is not such as to ensure that all charges incidental to road services are included therein. It is as much in the interests of the railway companies themselves

as in the interests of the trading community, that the road transport services proposed to be instituted should be self-supporting, and, having regard to the fact that it is intended to earn a standard revenue adequately to remunerate the capital ena,plo,yed in road transport, the railway companies are prepared to include in the Bill a special form of account to cover the revenue earned by and the charges incurred its connection with road services, together with a statement of the capital employed therein,.

As the railway companies have already decided to delete from the Bill the powers with regard to passenger-carrying in road vehicles, Section 9, which empowers them to make by-laws in connection with their road vehicles, will also be deleted. This should allay the fears of those who saw in the section a danger that the railway companies' by-laws might in any way clash with existing interests.

The assurances and proposed amendments of the Bill set out in this memorandum merely represent the intention which the railway companies by the clauses of the Bill desired to put into effect, and which, on several occasions, they have endeavoured to make clear.

It is hoped that the definite pledges contained in this memorandum will remove any apprehension as to the completeness of the safeguards outlined in the Bill and which it is felt arose in a large measure from ael.ack of appreciation of the intentions of the railway companies to make such safeguards effective..