Do easy on Green 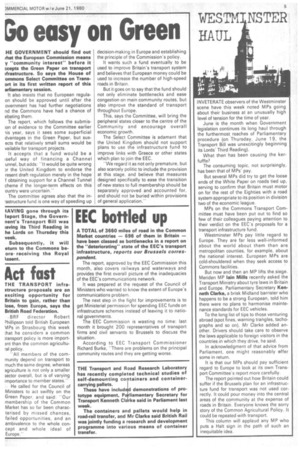 Page 7, 21st June 1980 — Do easy on Green
Close
Noticed an error?
If you've noticed an error in this article please click here to report it so we can fix it.

HE GOVERNMENT should find out that the European Commission means y "community interest" before it r:cepts the Green Paper on transport drastructure. So says the House of ommons Select Committee on Transort in its first written report of this arliarnentary session.

It also insists that no European regulaon should be approved until after the overnment has had further negotiations rid the Commons have had a chance of ebating them.

The report, which follows the submison of evidence to the Committee earlier riis year, says it sees some superficial dvantages in the Green Paper, but susects that relatively small sums would be vailable for transport projects.

It accepts that a fund would be a Iseful way of financing a Channel unnel, but adds: "It would be quite wrong )r the United Kingdom to endorse the resent draft regulation merely in the hope

f obtaining support for a Channel Tunnel cheme if the longer-term effects on this ountry were uncertain."

The committee agrees also that the inrastructure fund is one way of speeding up decision-making in Europe and establishing the principle of the Commission's policy.

It wants such a fund eventually to be used to improve Britain's transport system and believes that European money could be used to increase the number of high-speed roads in Britain.

But it goes on to say that the fund should not only eliminate bottlenecks and ease congestion on main community routes, but also improve the standard of transport throughout Europe.

This, says the Committee, will bring the peripheral states closer to the centre of the Community and encourage overall economic growth.

The Select Committee is adamant that the United Kingdom should not support plans to use the infrastructure fund to improve links with Greece or other states which plan to join the EEC.

"We regard it as not only premature, but also scarcely politic to include the provision at this stage, and believe that measures designed specifically to ease the transition of new states to full membership should be separately approved and accounted for, and should not be buried within provisions of general application."