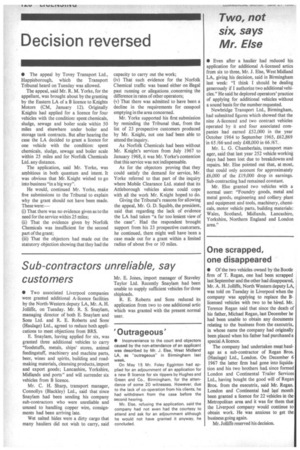 • Inconvenience to the court and objectors caused by the non-attendance of an applicant was described by Mr. J. Else, West Midland LA, as "outrageous" in Birmingham last week.

On May 15 Mr. Foley Egginton had applied for an adjournment of an application for a new B licence for six tippers by Hughes and Green and Co., Birmingham, for the attendance of some 20 witnesses. However, due to the lack of co-operation from his clients, he had withdrawn from the case before the second hearing.

Mr. Else, refusing the application, said the company had not even had the courtesy to attend and ask for an adjournment although he would not have granted it anyway, he concluded.