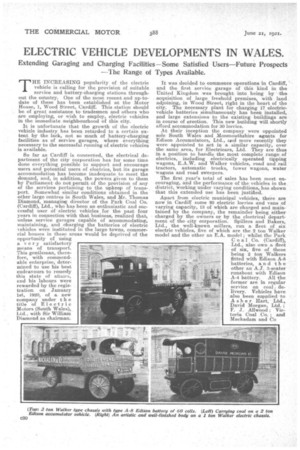 THE INCREASING popularity of the electric vehicle is calling for the provision of suitable service and battery-charging stations throughout the country. One of the most recent and up-todate ofthese has been established at the Motor House, 1, Wood Street, Cardiff. This station should be of great assistance to tradesmen and others who are employing, or wish to employ, electric vehicles in the immediate neighbourhood of this city.

It is unfortunate that the growth of the electric vehicle industry has been retarded to a certain extent by the lack, not so much of battery-charging facilitiesas of service garages, where everything necessary to the successful running of electric vehicles is available.

So far as Cardiff is concerned, the electrical department of the city corporation has for some time done everything possible to support and encourage users and potential users of electrics, but its garage accommodation has become inadequateto meet the demand, and, in addition, the powers given to them by Parliament do not permit of the provision of any of the services pertaining to the upkeep of transport. Somewhat similar conditions obtained in the other large centres in South Wales, and Mr. Thomas Diamond, managing director of the Park Coal Co. (Cardiff), Ltd., who has been an enthusiastic and successful user of electric vehicles for the past four years in connection with that business, realized that, unless service garages capable of accommodating, maintaining, and charging the batteries of electric vehicles were instituted in the large towns, commercial houses in these areas would be deprived of the opportunity of using a very satisfactory means of transport. This gentleman, therefore, with commendable enterprise, determined to use his best endeavours to remedy this state of affairs, and his labours were rewarded by the registration on January 1st, 1920, of a new company under t h e title of Electric Motors (South Wales), Ltd., with Sir William Diamond as chairman.

It was decided to commence operation& in Cardiff, and the first service garage of this kind in the United Kingdom was brought into being by ,the acquisition of large freehold premises' with land adjoining, in Wood Street, right in the heart of the city. The necessary plant for charging 17 electricvehicle batteries simultaneously has been installed, and large extensions to the existing buildings are in course of erection. This new building will shortly afford accommodation for 30 lorries.

At their inception the company were oppointed sole South Wales and Monmouthshire agents for Edison Accumulators, Ltd., aoid more recently they were appointed to act in a similar capacity, over the same area, for Electricars, Ltd. They are thus in a position to handle the most complete range of electrics, including electrically operated tipping wagons, E.A.W. and Walker vehicles, road and rail tractors, automatic trucks, tower wagons, water wagons and road sweepers.

The first year's total of sales has been most encouraging, and the performance of the vehicles in the district, working under varying conditions, has shown that this extended use has been justified.

Apart from electric municipal vehicles, there are now in Cardiff some 20 electric lorries and vans of varying capacity, 12 of which are charged and maintamed by the company, the remainder being either charged by the owners or by the electrical department Of the city corporation. Spillers and Bakers, Ltd., the well-known millers, run a fleet of six electric vehicles, five of which are the 2 ton Walker model and the other an E.A. model ; whilst the Park

Ltd., also own a fleet of six, five of these being 2 ton Walkers fitted with Edison A-8 batteries, and the other an A.J. 3-seater runabout with Edison A-4 battery. All the former are in regular service on coal. delivery. Vehicles have also been supplied -to sh er Hart, Ltd., David Morgan, Ltd. ; F. J. Ailwood ; Victoria Coal Co. ; and Mackadam and Co