A Vaporizer for Oil Fuel 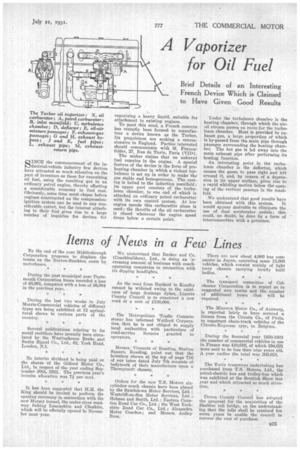 SINCE the commencement of the industrial-vehicle industry few devices have attracted so much attention on the part of inventors as those for vaporizing oil fuel, using the resulting gas in an ordinary petrol engine, thereby effecting a considerable economy in fuel cost. Obviously, some time must elapse before engines constructed on the compressionignition system can be used to any considerable extent, but the interest attaching to their fuel gives rise to a large number of inquiries for devices for

vaporizing a heavy liquid, suitable for attachment to existing engines.

To meet this need, a Fronde concern has recently been formed to manufacture a device known as the Turbot. Its proprietors are seeking a concessionaire in England. Parties interested should communicate with M. Frauenfolder, 27, Rue de Turin, Paris (Vile). The maker claims that no unburnt fuel remains in the engine. A special feature of the device is the form of preheating chamber in which a violent turbulence is set up in order to make the gas stable and homogeneous. The casting is bolted to the induction manifold ; its upper part consists of the turbulence chamber, to one end of which is attached an ordinary petrol carburetter with its own control system. At low engine speeds this carburetter alone is used ; the throttle of the oil carburetter is closed whenever the engine speed drops below a certain point. Under the turbulence chamber is the heating chamber, through which the airoil stream passes en route for the turbulence chamber. Heat is provided by exhaust gas, a large proportion of which is by-passed from the main pipe through passages surrounding the heating chamber. The hot gas is led away into the main exhaust pipe after performing its heating function.

An interesting point in the turbulence chamber is the deflector, which causes the gases to pass right and left around it, and, by reason of a depression in its upper surface, gives rise to a rapid whirling motion below the opening of the vertical passage in the manifold.

We understand that good results have been obtained with this system. It would appear desirable to eliminate the use of dual accelerator pedals ; this could, no doubt, be done by a form of interconnection with a governor.