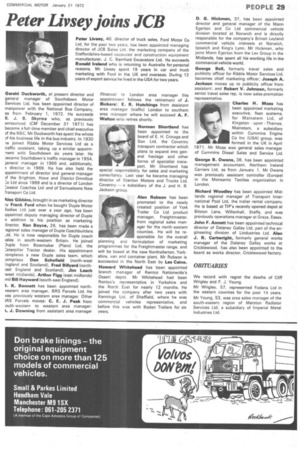 Peter Livsey, 40, director of truck sales, Ford Motor Co Ltd, for the past two years, has been appointed managing director of JCB Sales Ltd, the marketing company of the Staffordshire-based excavator and construction equipment manufacturer, J. C. Bamford Excavators Ltd. He succeeds Ronald Ireland who is returning to Australia for personal reasons, Mr Livsey spent 19 years in car and truck marketing with Ford in the UK and overseas. During 12 years of export service he lived in the USA for two years.

Gerald Duckworth, at present director and general manager of Southdown Motor Services Ltd, has been appointed director of manpower with the National Bus Company, as from February 1. 1972. He succeeds S. J. B. Skyrme who, as previously announced ICM December 31 1971) has become a full-time member and chief executive of the NBC. Mr Duckworth has spent the whole of his business life in the bus industry. In 1930 le joined Ribble Motor Services Ltd as a Iraffic assistant, taking up a similar appoint-nent with Southdown six years later. He aecame Southdown's traffic manager in 1954, ]eneral manager in 1966 and, additionally,

director in 1969. He has also held the 3ppointment of director and general manager af the Brighton, Hove and District Omnibus :o Ltd since 1969 and is a director of London :instal Coaches Ltd and of Samuelsons New fransport Co Ltd.

Norman Shortland has been appointed to the board of E. H. Crinage and Son Ltd, the Coventry transport contractor which plans to expand into general haulage and other forms of specialist transport. Mr Shortland has special responsibility for sales and marketing consultancy. Last year he became managing director of Stanton Motors and Trucks Ltd, Coventry — a subsidiary of the J. and H. B. Jackson group.

Alan Robson has been promoted to the newly created position of York Trailer Co Ltd product manager, Freightm aster, from regional sales manager for the north-eastern counties. He will be responsible for the overall planning and formulation of marketing programmes for the Freightmaster range, and will be based at the new Northallerton. Yorkshire, van and container plant. Mr Robson is succeeded in the North East by Les Caine. Howard Whitehead has been appointed branch manager of Rentco Nationwide's Ossett depot, Mr Whitehead had been Rentco's representative in Yorkshire and the North East for nearly 12 months. He joined the company after two years with Kennings Ltd, of Sheffield, where he was commercial vehicles representative, and before this was with Boden Trailers for six years. D. G. Hickman, 37, has been appointed director and general manager of the Mann Egerton and Co Ltd commercial vehicle division located at Norwich and is directly responsible for the company's British Leyland commercial vehicle interests at Norwich, Ipswich and King's Lynn. Mr Hickman, who joins Mann Egerton from the Lex Group in the Midlands, has spent all his working life in the commercial vehicle world.

George B. Owens, 38, has been appointed management accountant, Northern Ireland Carriers Ltd, as from January 1. Mr Owens was previously assistant controller (Europe) in the Monsanto Textiles organization in London.

Richard Woodley has been appointed Midlands regional manager of Transport International Pool Ltd, the trailer rental company. He is based at TIP'S recently opened depot at Bilston Lane, Willenhall, Staffs, and was previously operations manager at Grays, Essex.

We record with regret the deaths of Cliff Wrigley and F. J. Young.

Mr Wrigley, 57, represented Fodens Ltd in the eastern counties for the past 14 years. Mr Young, 53, was area sales manager of the south-eastern region of Marston Radiator Services Ltd, a subsidiary of Imperial Metal Industries Ltd.