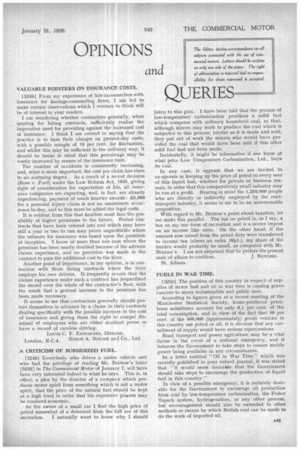 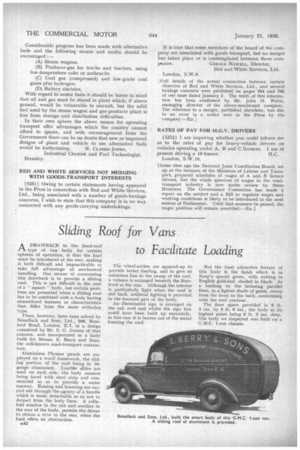 [5248] From my experience of late inconnection with insurance for haulage-contracting firms, I am led to make certain observations which I venture to think will be of interest to your readers.

I am wondering whether contractors generally, when quoting for hiring contracts, sufficiently realize the imperative need for providing against the increased cost of insurance. I think I am correct in saying that the practice is to base their charges on present-day costs, with a possible margin of 10 per cent, for fluctuation, and whilst this may be sufficient in the ordinary way, it should be borne in mind that this percentage may be vastly increased by reason of the insurance item.

The number of accidents is consistently increasing, and, what is more important, the cost per claim has risen to an alaeming degree. As a result of a recent decision (Rose v. Ford) under the Law Reform Act, 1935, giving right of consideration for expectation of life, all insurance companies are expecting, and, in fact, are already experiencing, payment of much heavier awards : £5,000 for a personal injury claim is not an uncommon occurrence to-day, and to this must be added the legal costs.

It is evident from this that hauliers must face the possibility of higher premiums in the future. Period contracts that have been entered into and which may have still a year or two to run may prove unprofitable where the estimate for insurance was based upon the premium at inception. I know of more than one case where the premium has been nearly doubled because of the adverse claims experience, and no provision was made in the contract to pass the additional cost to the hirer.

Another point of importance, in my opinion, is in connection with those hiring contracts where the hirer employs his own drivers. It frequently occurs that the claims experience under such a contract has jeopardized the record over the whole of the contractor's fleet, with the result that a general increase in the premium has been made necessary.

It seems to me that contractors generally should protect themselves in advance by a clause in their contracts dealing specifically with the possible increase in the cost of insurance and giving them the right to compel dismissal of employees who are either accident prone or have a record of careless driving.

A CRITICISM OF SUBSIDIZED FUEL,

152491 Everybody who drives a motor vehicle and who had the privilege of reading Mr. Bristow's letter [5232] in The Commercial Motor of January 7, will have been very interested indeed in what he says. This is, in effect, a plea by the director of a company which produces motor spirit from something which is not a motor spirit, that the price of the natural fuel should be kept at a high level in order that his expensive prckcess may be rendered economic.

As the owner of a small car I find the high price of petrol somewhat of a deterrent from the full use of this recreation. I naturally want to know why I should listen to this plea. I have been told that the process of low-temperature carbonization prodnces a solid fuel which competes with ordinary household coal, so that, although miners may work to produce the coal which is subjected to this process, insofar as it is made and sold, they put out of work the miners who would have provided the coal that would have been sold if this other solid fuel had not been made.

Incidentally, it might be informative if one knew at what price Low Temperature Carbonisation, Ltd., buys its coal.

In any case, it appears that we are invited to co-operate in keeping up the price of petrol to every user of this liquid fuel, whether for private or business reasons, in order that this comparatively small industry may be run at a profit. Bearing in mind the 1,250,000 people who are directly or indirectly employed by the roadtransport industry, it seems to me to be an unreasonable proposition.

With regard to Mr. Bristow's point about taxation, let. me make this parallel. The tax on petrol is, as I say, a tax on my one form of recreation and is a severe impost on an income like mine. On the other hand, if the amount now raised from. the petrol duty were transferred to income tax (about an extra 100.), my share of the burden would probably be small, as compared with Mr. Bristow's. I am not surprised that he prefers the present state of affairs to continue. J. BOWDEN. SE. Albans.

[5250] The position of this country in respect of supplies of motor fuel and oil in war time is causing grave concern to many industrialists and public men.

According to figures given at a recent meeting of the Manchester Statistical Society, home-produced petroleum substitutes account for only 8.1 per cent. of the total consumption, and in view of the fact that 90 per cent, of the 460,000 (approximately) goods vehicles in this country use petrol or oil, it is obvious that any curtailment of supply would have serious repercussions.

Road transport and power agriculture may be a vital factor in the event of a national emergency, and it behoves the Government to take steps to ensure mobile power being available in any circumstances.

In a letter entitled " Oil in War Time" which was recently published in your valued journal, it was stated that "it would seem desiralale that the Government should take steps to encourage the production of liquid fuel in this country."

In view of a possible emergency, it is certainly desirable for the Government to encourage oil production from coal by low-temperature carbonization, the Fisher Topsch system, hydrogenation, or any other process, but encouragement should also be extended to other methods or means by which British coal can be made to do the work of imported oil.

Considerable progress has been made with alternative fuels and the following means and media should be encouraged (A) Steam wagons.

(B) Producer-gas for trucks and tractors, using low-temperature coke or anthracite.

With regard to motor fuels it should be borne in mind that oil and gas must be stored in plant which, if above ground, would be vulnerable to aircraft, but the solid fuel used by the steam wagon and gas-producer plant is free from storage and distribution difficulties.

In their own sphere the above means for operating transport offer advantages which the country cannot afford to ignore, and with encouragement from the Government there can be no doubt that new or improved designs of plant and vehicle to use alternative fuels would be forthcoming. N. CLARKE-JONES, Industrial Chemist and Fuel Technologist. Bromley.

RED AND WHITE SERVICES NOT MERGING WITH GOODS-TRANSPORT INTERESTS

[5251] Owing to certain statements having appeared in the Press in connection with Red and White Services, Ltd., being associated with a number of goods-haulage concerns, I wish to state that this company is in no way connected with any goods-carrying undertakings.

It is true that some members of the board of the company are associated with goods transport, but no merger has taken place or is contemplated between these com panies. GERALD NOWELL, Director, Red and White Services, Ltd.

[Full details of the actual connection between certain directors of Red and White Services, Ltd., and several haulage concerns were published on pages 764 and 765 of our issue dated January 7. The truth of this information has been confirmed by Mr. John H. Watts, managing director of the above-mentioned company. The reference to a merger, published elsewhere, was due to an error in a notice sent to the Press by the

RATES OF PAY FOR H.G.V. DRIVERS

[52521 I am inquiring whether you could inform me as to the rates of pay for heavy-vehicle drivers on vehicles operating under A, B and C licences. I am at present driving a 10-tormer. H.C. London, S.W.19.

[Some time ago the National Joint Conciliation Board, set up at the instance of the Ministers of Labour and Transport, prepared schedules of wages of A and B licence drivers, but the whole question of wages in the roadtransport industry is now under review by those Ministers. The Government Committee has made a report on the subject and a Bill to regulate wages and workingconditions is likely to be introduced in the next session of Parliament. Until that measure be passed, the wages position will remain unsettled.—En.]