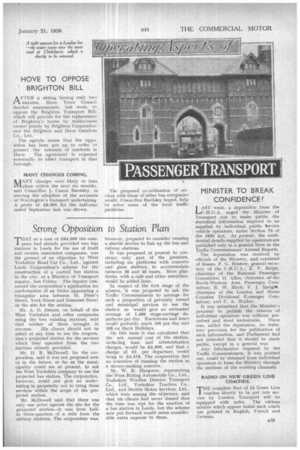 Page 25, 21st January 1938 — HOVE TO OPPOSE BRIGHTON BILL
Close
Noticed an error?
If you've noticed an error in this article please click here to report it so we can fix it.
Keywords : Brighton And Hove, Monarch's Way, Transport In East Sussex, Brighton, Hove, Social Issues

A FTER a sitting lasting only two

minutes, Hove Town Council decided unanimously, last week, to oppose the Brighton Transport Bill, which will provide for the replacement of Brighton's trams by trolleybuses owned jointly by Brighton Corporation and the Brighton and Hove Omnibus Co., Ltd.

The agenda states that the opposition has been put up in order to protect the interests of residents in Hove The agreement is expected eventually to affect transport in that borough.

lkfi ANY changes were likely to take IV1 place within the next six months, said Councillor J. Canon Bardsley, in moving the adoption of the accounts of Warrington's transport undertaking A profit of £8,365 for the half-year ended September last was shown. The proposed co-ordination of services with those of other bus companies would, Councillor Bardsley hoped, help to solve some of the local traffic problems