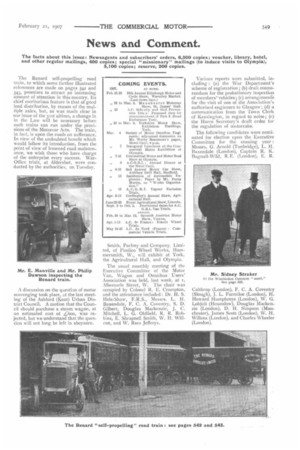 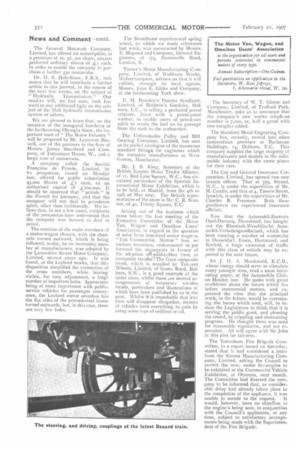 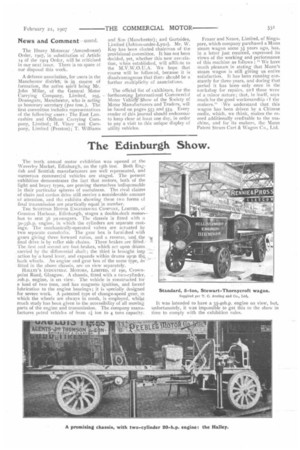 Page 13, 21st February 1907 — News and Comment.
Close
Noticed an error?
If you've noticed an error in this article please click here to report it so we can fix it.
Keywords : Steam Wagon, Ford Motor Company

The Renard self-propelling road train, to which some further illustrated references are made on pages 542 and 543, promises to attract an increasing amount of attention in this country. Its chief meritorious feature is that of good load distribution, by reason of the multiple axles, but, as was made clear in our issue of the 31st ultimo, a change in in the Law will be necessary before such trains can run under the provisions of the Motorcar Acts. The train, in fact, is upon the roads on sufferance. In view of the undoubted benefit which would follow its introduction, from the point of view of lessened road maintenance, we wish those who have charge of the enterprise every success. WarOffice trials, at Aldershot, were conducted by the authorities, on Tuesday.

A discussion on the question of motor scavenging took place, at the last meeting of the Ashford (Kent) Urban District Council. A motion that the Council should purchase a steam wagon, at an estimated cost of .4.boo, was rejected, but we understand that the question will not long be left in abeyance. Smith, Parfrey and Company, Limited, of Pimlico Wheel Works, Hammersmith, W., will exhibit at York, the Agricultural Hall, and Olympia.

The usual monthly meeting of the Executive Committee of the Motor Van, Wagon and Omnibus Users' Association was held, last week, at r, Albemarle Street, W. The chair was occupied by Colonel R. E. Crompton, and the attendance included : Dr. H. S. Hele-Shaw, F.R.S., Messrs. L. H. Baxemiale, F. C. A. Coventry, S. D. Gilbert, Douglas Mackenzie, J. C. Mitchell, L. G. Oldfield, R. R. Robbins, E. Shrapnel' Smith, W. H. Willcox, and W. Rees Jeffreys. Various reports were submitted, including : (a) the War Department's scheme of registration ; (b) draft memorandum for the probationary inspection of members' vehicles ; (c) arrangements for the visit of one of the Association's authorised engineers to Glasgow ; (d) a communication front the Town Clerk of Kensington, in regard to noise; (e) the Home Secretary's draft order for the regulation of tnotorcabs.

Dr. II. S. Hele-Shaw, F.R.S., intimates that he will oontribute a further article to this journal, in the course of the next few weeks, on the subject of " Hydraulic Transmission." Our

readers will, we feel sure, look forward to any additional light on the subject of the !Tall hydraulic transmission system or others.

We are pleased to learn that, on the occasion of the inaugural luneheen at the forthcoming Olympia Show, the important toast of " The Motor Industry will be proposed by Mr. Leyeester garwell, one of the partners in the firm of Messrs. James Shoolbred and Company, of Tottenham House, W., and a large user of motorvans.

A company called the SocieliTi Francaise de Petrole, Limited, by its prospectus, issued on Monday last, offered for public subscription 45,000 Shares of ZI each, ex an authorised capital of L200,000. It should be observed that " petrole " is the French for kerosene, and that the company will not cleat in petroleum spirit, other than incidentally. We believe that, in not a few cases, recipients of the prospectus have understeod that the company was formed to deal in petrol.

The erection of the main members of a motor-wagon chassls, with the chan nels turned outward, which is being followed, to-day, by an increasing number of manufacturers, was adopted by the Lancashire Steam Motor Company, Limited, several years ago. It was found, at the Leyland works, that this disposition simplified the connection of the cross members, while leaving visible, for easy adjustment, a large number of important bolts. Appearance being of more importance with public service vehicles for passenger conveyance, the Leyland motor omnibus has the flat sides of the pressed-steel frame turned outwards, but, in this case, there are very few bolts. The Broadhurst experimental spring wheel, to which we made references last week, was constructed by Messrs. E. Mepsted and Company, General Engineers, of 175, Pentonville Road, London, N.

Turner's Motor Manufacturing Campally, Limited, of Wulfruna Works, Wolverhampton, advises us that it will exhibit, through its local agents, Messrs. John E. Gibbs and Company, at the forthcoming York show.

E. M. Bowden's' Patents Syndicate, Limited, of Baldwin's Gardens, Holborn, E.G., is selling a perfected petrol strainer, fftted with a petrol-proof washer, to enable users of petroleum spirit to strain the fuel on its passage from the tank to the carburetter.

The Unbreakable Pulley and Mill Gearing Company, Limited, has sent us its pocket catalogue of the numerous standard fittings for engineers which the company manufactures at \Vest Gorton, Manchester.

Mr. J. B. King, Secretary of the British Empire Motor Trades Alliance, of It, Red Lion Square, W.C., has circulated particulars of the Spanish International Motor Exhibition, which is to be held, at Madrid, from the 4th to 19th of May next, The British representative of the show is Mr. C. R. Stan. ton, of 4o, Trinity Square, F,C,

Arising out of the business which came before the last meeting of the Executive Committee of the Motor Van, Wagon and Omnibus , Users' Association, in regard to the question of noise from iron-tired motor wag,00s, "TnE COMMERCIAL MOTOR " has, on various occasions, endeavoured to put forward the arguments in favour of the adoption off solid-rubber tires, or composite trearlse:The Care composite tread, which is supplied by Tan..tent Wheels, Limited, of Grove Road, Balham, SW., is a, good example of the latter class, whilst there are several arrangements of temporary wooden treads, particulars and illustrations of which have been published by us in the past. Whilst it is improbable that iron tires will disappear altogether, owners of vehicles have everything to gain by using some type of resilient trend.

'Hie Secretary of W. T. Glover and Company, Limited, of Trafford Park, Manchester, asks us to announce that the company's new works telephone number is 7,200, or, half a gross with two noughts added.

The Standard Metal Engraving Company has, recently, moved into More commodious • premises at Buchanan Buildings, 24, Holborn, E.C. This company supplies the large majority of manufacturers and dealers in the automobile industry with the name plates for their cars.

Now that the Autornobil-Zentrale Opel-Darracq, Dusseldorf, has bought Out the Rhenisch-Westfillische Automobil-Verkehrsgesellschaft, which has been running a number of inotorcabs in Dusseldorf, Essen, Dortmund, and Krefeld, a large extension of traffic with this class of vehicle may be expected in the near future.

Sir J. FL A. Macdonald, K.C.B., whose energy should serve to stimulate many younger men, read a most interesting paper, at the Automobile Club, on Monday last. He spoke with great confidence about the future which lies before commercial motors, and expressed the view that the principal work, in the future, would be overcoming the forces which tend, still, to induce the Legislature to think that it is serving the public good, and pleasing the crowd, by crippling and obstructingprogress. He thought there was need for reasonable regulation, and not repression. All will agree with Sir John in this plea for fairness.

The Tottenham Fire Brigade Committee, in a report issued en Saturday, stated that it had considered a letter from the Simms Manufacturing Company, Limited, asking the Council to permit the new, motor fire-engine to be exhibited at the Commercial Vehicle Exhibition, at Olympia, next month, The Committee had directed the company to be informed that, as considerable delay had already taken place in the completion of the appliance, it was

unable to accede to the request. It would, however, have no objection to the engine's being seen, in conjunction with the Council's appliances, at any time, subject to satisfactory arrangements being made with the Superintendent of the Fire Brigade.

The Heavy Motorcar 'Amendment) Order, 1907, in substitution of Article 14 of the teioq. Order, will be criticised in our next issue. There is no space at our disposal this week.

and Son (Manchester); and Gartsicles, Limited (Ashton-under-Lyne). Mr. W. Kay has been elected chairman of the provisional committee. •It has not been decided, yet, whether this new asseciation, when established, will affiliate to the M.V.W.O.U.A. We hope that course will be followed, because it is disadvantageous that the Should be a' further multiplicity of associations.

The official list of exhibitors, for the forthcoming International Commercial Motor Vehtcre'' Show of the Society of Motor Manufacturers and Traders, will be found on pages 553 and 55 t. Every reader of this journal should endeavour to keep clear at least one day, in order to pay a visit to this unique display of utility vehicles.

Fraser and heave, Limited, of Singapore, which company purchased a Mann steam wagon some 3 years ago, has, in a letter just received, expressed its views of the working and performanoe of this machine as follows : " We have much pleasure in stating that Mann's steam wagon is still giving us entire satisfaction. It has been running constantly for three years, and during that period it has been only once in the workshop for repairs, and these weru of a minor nature; that, in itself, says much for the good workmanship r f the makers." • We understand that this wagon has been driven by a Chinese coolie, which, we think, makes the record additionally creditable to the machine, and for its makers, the Mann Patent Steam Cart & ‘Vagon Co., Ltd.