Is Laying-up a Paying Scheme? 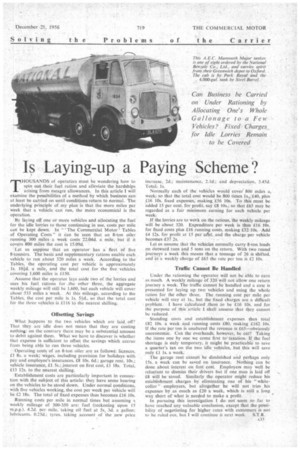 Page 59, 21st December 1956 — Is Laying-up a Paying Scheme?
Close
Noticed an error?
If you've noticed an error in this article please click here to report it so we can fix it.

Can Business be Carried on Under Rationing by Allocating One's .Whole Gallonage to a Feli.• Vehicles? Fixed Charges, for Idle Lorries Remain • to be Covered

THOUSANDS of operators must be wondering how to spin out their fuel ration and alleviate the hardships arising from meagre allowances. In this article I will examine the possibilities of a method by which business can at least be carried on until conditions return to normal. The underlying principle of my plan is that the more miles per week that a vehicle can run, the more economical is the operation.

By laying off one or more vehicles and allocating the fuel for the idle lorries to those continuing in use. costs per mile cat' be kept down. In " 'The Commercial Motor' Tables of Operating Costs" it can be seen that an 8-ton oiler running 300 miles a week costs 22.04d. a mile, but if it covers 800 miles the cost is 15.09d, .

Let us suppose that an operator has a fleet of five 8-tonners. The basic and supplementary rations enable each vehicle to run about 320 miles a week. According to the• Tables, the operating cost per vehicle is approximately .

Assume that the operator lays aside two of the lorries and uses his fuel rations for _the other three, the aggregate weekly mileage will still be 1,600, but each vehicle will cover about 533 miles a week. At this mileage, according to the Tables, the cost per mile is Is. 5-1-d., so that the total cost for the three vehicles is £116 to the nearest shilling.

What happens to the two vehicles which arc laid, off? That they are idle does not mean that they are costing nothing: on the contrary there may be a substantial amount to debit against them. What we have to discover is whether that expense is sufficient to offset the savings which accrue from being able to run three vehicles.

Establishment costs arc particularly important in connection with the subject of this article: they have some bearing on the vehicles to be stood down. Under normal conditions, with five vehicles working, the cost per week pet vehicle will be £2 18s. The total of fixed expenses thus becomes £16 10s.

Let us assume that the vehicles normally carry 8-ton loads on Outward runs and 5 tons on the return. With two round journeys a week this means that a tonnage of 26 is shifted, and at a weekly charge of £65 the rate per ton is £2 10s.

Under the rationing the operator will not be able to earn as much, A weekly mileage of 320 will not allow one return journey a week. The traffic cannot be handled and a case is presented for laying up two vehicles and using the whole ration for the other three. The running cost per mile per vehicle will stay at Is., but the fixed charges are a difficult problem. I have calculated them to be £16 10s. and for the purpose of this article I shall assume that they cannot be reduced.

Standing costs and establishment expenses thus total £82 10s. a week and running costs £80, making 1162 10s. If the rate per ton is unaltered the revenue is £65—obviously uneconomic. Can the overheads, however, be cut? Taking the items one by one we come first to' taxation. If the fuel shortage is only temporary, it might be practicable to save a quarter's tax on the two idle vehicles, but this will save only it Is. a week.

The garage rent cannot be diminished and perhaps only 15s. a week can be saved on instirance. Nothing can be done about 'interest on first cost. Employeps may well be reluctant to dismiss their drivers but if one man is laid off £8 will be saved. Similarly the operator might reduce his establishment charges by eliminating one of his " whitecollar " employees, but altogether he will not trim his expenses by as much as 120 a week, which is still a long way short of what is needed to make a profit.

In pursuing this investigation I do not seem so far to have reached any valuable conclusion, except that the possibility of negotiating for higher rates with customers is not

to he ruled out. but I will continue it next week. S.T.R.