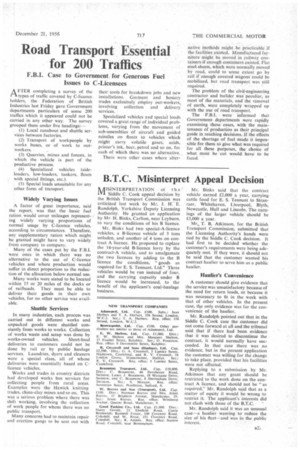 Page 57, 21st December 1956 — Road Transport Essential for 200 Traffics
Close
Noticed an error?
If you've noticed an error in this article please click here to report it so we can fix it.

F.B.I. Case to Government for Generous Fuel Issues to C-Licensees

AFTER completing a survey of the types of traffic covered by C-licence holders, the Federation of British Industries last Friday gave Government departments particulars of some 200 traffics which it appeared could not be carried in any other way. The survey grouped them under five headings:—

(2) Transport of workpeople by works buses, or of work to outworkers.

(3) Quarries, mines and forests, in which the vehicle is part of the productive process, (4) Specialized vehicles (sideloaders, low-loaders, tankers, floats with special fittings, etc.).

(5) Special loads unsuitable for any other form of transport.

A factor of great importance, said the report, was that the basic fuel ration would cover mileages represent, ing widely varying proportions of normal usage by C-licence vehicles, according to circumstances. Therefore, any supplementary ration which might be granted might have to vary widely from company to company, • Many of the cases put by the F.B.I. were ones in which there was no alternative to the use of C-licence vehicles and where production would stiffer in direct proportion to the reduction of the allocation below normal use.

Many works were stated to be located within 15 or 20 miles of the docks or of railheads. They must be able to deliver their goods in their own vehicles, for no other service was availabk.

In many industries, each process was carried out in different works and unpacked goods were shuttled constantly from works to works. Collection of works waste and scrap was done by works-owned vehicles. Short-haul deliveries to customers could not be done by rail or by public haulage services. Laundries, dyers and cleaners were a special class, all of whose deliveries were essentially based on Clicence vehicles.

Works and trades in country districts had developed works bus services for collecting people from rural areas. Examples were the Hawick knitting trades, china-clay mines and so on. This was a serious problem where there was shift working, involving the collection of work people for whom there was no public transport.

Many concerns had to maintain repair and erection gangs to be sent out with their tools for breakdown jobs and new installations. Garment and hosiery trades exclusively criiploy out-workers,. involving collection and delivery services.

Specialized vehicles and special loads covered a great range. of individual problems, varying from the movement of sub-assemblies of aircraft and guided missiles on floats to vehicles which might carry volatile gases, acids, printer's ink, beer, petrol and so on. for each of which there was no alternative.

There were other cases where alter native methods might be practicable if the facilities existed. Manufactured furniture might be moved in railway containers if enough containers existed. Flat steel sheets, which were normally moved by road, could to some extent go by rail if enough covered wagons could be mobilized, but road transport was still required. '

The problem of the civil-engineering contractor and builder was peculiar, as most of the materials, and the removal of earth, were completely wrapped tip with the use of road transport.

The F.B.I. were informed that Government departments were rapidly examining these cases, with the maintenance of production as their principal guide in reaching decisions. If the effects of the shortage of fuel made it impossible for them to give what was required for all these purposes, the choice of what must be cut would have to be faced.