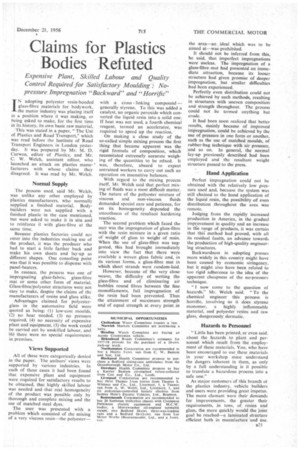 Expensive Plant, Skilled Labour and Quality Control Required for Satisfactory Moulding Nopressure Impregnation "Backward" and "Horrific" IN adopting polyester resin-bonded glass-fibre materials for bodywork, the motor industry was placing itself in a position where it was making, or being asked to make, for the first time in its history, its own basic raw material.

This was stated in a paper, "The Use of Plastics and Road Transport," which was read before the Institute of Road Transport Engineers in London yesterday. It was prepared by Mr. M. D. Cut-wen, editor of Plastics, and Mr. C. W. Welch, assistant editor, who launched an attack on plastics manu• facturers with whose claims they disagreed. It was read by Mr. Welch.

The process used, said Mr. Welch, was unlike any other employed by plastics manufacturers, who normally supplied a finished material. Bodybuilders were not supplied with a finished plastic in the case mentioned, but were asked to make it in situ and to reinforce it with glass-fibre at the same time.

Because plastics factories could not enter into the industries making use of the product, it was the producer who had to start a little farther back and make his own sheets and lay-up as different shapes. One consoling point was that it was possible to dispense with panel-beaters.

In essence, the process was one of impregnating glass-fabric, glass-fibre mat or some other form of material. Glass-fibre/polyester structures were not easy to make, despite the claims of the manufacturers of resins and glass alike.

Advantages claimed for polyesterglass in the automotive field were quoted as being: (1) low-cost moulds, (2) no heat needed, (3) no pressure required, (4) no necessity of expensive plant and equipment, (5) the work could be carried out by unskilled labour, and .(6) there were no special requirements in premises.

Views Supported All of these were categorically denied in the paper. The authors' views were supported by various industries. In each of these cases it had been found that expensive plant and equipment were required for satisfactory results to be obtained, that highly skilled labour was needed and -that real homogeneity of the product was possible only by thorough and complete mixing and the use of matched steel dyes.

with a cross linking compound — generally styrene. To this was added a catalyst, an organic peroxide which converted the liquid resin into a solid one. If heat was not used, a fourth chemical reagent, termed an accelerator, was required to speed up the reaction.

On making a close study of the so-called simple mixing process the first thing that became apparent was the rigid formula of composition, which necessitated extremely accurate weighing of the quantities to be mixed. It was, therefore, absurd to expect untrained workers to carry out such an operation on insensitive balances.

With regard to the mixing process itself. Mr. Welch said that perfect mixing of fluids was a most difficult matter. The nature of the polyester mixture of viscous and non-viscous fluids demanded special care and patience, for on its homogeneity depended the smoothness of the resultant hardening reaction.

The second problem which faced the user was the impregnation of glass-fibre with the resin mixture in a given ratio of weight of glass to weight of resin. When the use of glass-fibre was suggested, this had brought immediately into view the fact that there were available a woven glass fabric and, in its various forms, a glass-fibre mat in which short strands were random-laid.

However, because of the very close. weave, the difficulty of wetting the glass-fibre and of eliminating air bubbles round fibres between the fine monofilaments, full impregnation of the resin had been prevented. Thus the attainment of maximum strength and of equal strength at every point in the area—an ideal which was to be aimed at—was prohibited.

It should not be inferred from this, he said, that imperfect impregnations were useless. The impregnation of a glass-fibre mat had presented an immediate attraction, because its looser structure had given promise of deeper impregnation, but similar difficulties had been experienced.

Perfectly even distribution could not be achieved by such methods, resulting in structures with uneven composition and strength throughout. The process could not be termed anything but crude.

It had been soon realized that better results, mainly because of improved impregnation, could be achieved by the use of pressure in one form or another, such as the use of matched moulds, of rubber-bag technique with air pressure. and so on. in general, the normal lay-up previously described had been employed and the resultant weight structure passed to the press.

Perfect impregnation could not be obtained with the relatively low pressure used and, because the system was still chained to the hand application of the liquid resin, the possibility of even distribution throughout the area was remote.

Judging from the rapidly increased production in America, in the gradual improvement in quality and an increase in the range of products, it was certain that this method had proved, with all its residual faults, an advance towards the production of high-quality engineering structures.

Backwardness in adopting presses more widely in this country might have been caused by economic stringency, but it might also have been related to too rigid adherence to the idea of the apparent cheapness of the no-pressure technique.

"1 now come to the question of hazards," Mr. Welch said. "To the chemical engineer this process is horrific, involving as it does styrene monomer, a highly inflammable material, and polyester resins and raw glass, dangerously dermatic.

Hazards to Personnel " Little has been printed, or even said, about the hazards to plant and personnel which result from the employment of these materials. You, who have been. encouraged to use these materials in your workshop must understand the dangers inherent in them, as only by a full understanding is it possible to translate a hazardous process into a safe one."

As major customers of this branch ot the plastics industry, vehicle builders and users were providing great impetus. The more clamant were their demands for improvements, the greater their requirements, in tons, of resins and glass, the more quickly would the joint goal be reached—a laminated structure efficient both in manufacture and use.