Is a Revo li 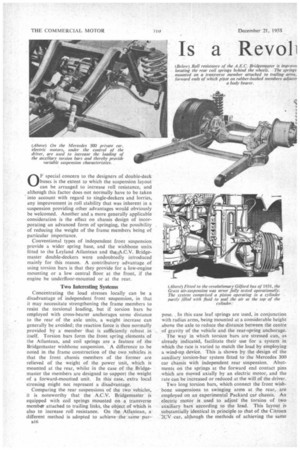 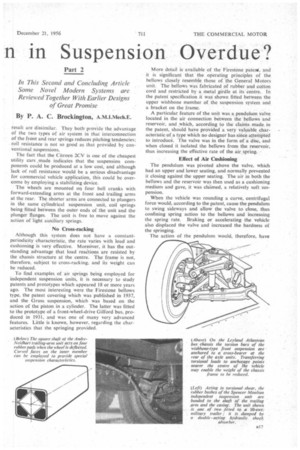 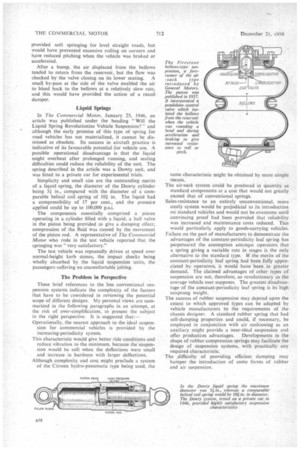 Page 50, 21st December 1956 — Is a Revo li
Close
Noticed an error?
If you've noticed an error in this article please click here to report it so we can fix it.

0 F special concern to the designers of double-deck buses is the extent to which the suspension layout can be arranged to increase roll resistance, and although this factor does not normally have to be taken . into account with regard to single-deckers and lorries, any improvement in roll stability that was inherent in a suspension providing other advantages would obviously be welcomed. Another and a more generally applicable consideration is the effect on chassis design of incorporating an advanced form of springing, the possibility of reducing the weight of the frame members being of particular importance.

Conventional types of independent front suspension provide a wider spring base, and the wishbone units fitted to the Leyland AtIantean and the.A.C.V. Bridgemaster double-deckers were undoubtedly introduced mainly for this reason. A contributory advantage of using torsion bars is that they provide for a low-engine mounting or a low central floor at the front, if the engine be underfloor-mounted or at the rear.

Two Interesting Systems Concentrating the load stresses locally can be a disadvantage of independent front suspension, in that it may necessitate strengthening the frame members to resist the torsional loading, but if torsion bars be employed with cross-bearer anchorages some distance to the rear of the axle units, a weight increase can generally be avoided; the reaction force is then normally provided by a. member that is sufficiently robust in itself. Torsion bars form the front spring elements of the Atlantean, and coil springs are a feature of the Bridgernaster wishbone suspension. A difference to be noted in the frame construction of the two .vehicles is that the front chassis members of the former are relieved of the weight of the power unit, which is mounted at the rear, whilst in the case of the Bridgemaster the members are designed to support the weight of a forward-mounted unit. In this case, extra local stressing might not represent a disadvantage.

Comparing the rear suspensions of the two vehicles, it is noteworthy that the A.C.V. Bridgemaster is equipped with coil springs mounted on a transverse membor attached to trailing links, the object of which is also to increase roll resistance. On the Atlantean, a different method is adopted to achieve the same pur

pose. , In this case leaf springs are 'used, in conjunction with radius arms, being mounted at a considerable height above the axle to reduce the distance between the centre of gravity of the vehicle and the rear-spring anchorage.

The way in which torsion bars are stressed can, as already indicated, facilitate their use for a system in which the rate is varied to match the load by employing a wind-up device. This is shown by the design of the auxiliary torsion-bar system fitted to the Mercedes 300 car chassis with independent rear suspension, Abutments on the springs at the forward end contact pins which are moved axially by an electric motor, and the rate can be increased or reduced at the will of the driver.

Two long torsion bars, which connect the front wishbone suspensions to swinging arms at the rear, are employed on an experimental Packard car chassis. An electric motor is used to adjust the torsion of two auxiliary bars according to the load. This layout is substantially identical in principle to that of the Citroen 2CV car, although the methods of achieving the same result are dissimilar. They both provide the advantage of the two types of air system in that interconnection of the front and rear springs reduces pitching tendencies; roll resistance is not so good as that provided by conventional suspensions.

The fact that the Citroen 2CV is one of the cheapest utility cars .made indicates that the suspension components could be produced at a low cost, and although lack of roll resistance would be a serious disadvantage for commercial vehicle application, this could be overcome by employing a stabilizing device.

The wheels are mounted on four bell cranks with forward-extending arms at the front and trailing arms at the rear. The shorter arms are connected to plungers in the same cylindrical suspension unit, coil springs being fitted between the outer ends of the unit and the plunger flanges. The unit is free to move against the action of light auxiliary springs.

No Cross-racking Although this system does not have a constantperiodicity characteristic, the rate varies with load and cushioning is very effective. Moreover, it has the outstanding advantage that load reaCtions are resisted by the chassis structure at the centre. The frame is not, therefore, subject to cross-racking. and its weight can be reduced.

To find examples of air springs being employed for independent suspension units, it is necessary to study patents and prototypes which appeared 18 or more years ago. The most interesting were the Firestone bellows type, the patent covering which was published in 1937, and the Gruss suspension, which was based on the action of the piston in a cylinder. The latter was fitted to the prototype of a front-wheel-drive Gilford bus, produced in 1931. and was one of many very advanced features. Little is known, however, regarding the characteristics that the springing provided. More detail is available of the Firestone patent, and it is significant that the operating principles of the bellows closely resemble those of the General Motors unit. The bellows was fabricated of rubber and cotton cord and restricted by a metal girdle at its centre. In the patent specification it was shown fitted between the upper wishbone member of the suspension system and a bracket on the frame.

A particular feature of the unit was a pendulum valve located in the air connection between the bellows and reservoir, and which, according to the claims made in the patent, should have provided a very valuable characteristic of ,a type which no designer has since attempted to introduce. The valve was in the form of a disc, and when closed it isolated the bellows from the reservoir, thus increasing the effective rate of the air spring.

Effect of Air Cushioning The pendulum was pivoted above the valve, which had an upper and lower seating, and normally prevented it closing against the upper seating. The air in both the bellows and the reservoir was then used as a cushioning medium and gave, it was claimed, a relatively soft suspension.

When the vehicle was rounding a curve, centrifugal force would, according to the patent, cause the pendulum to swing sideways and allow the valve to close, thus confining spring action to the bellows and increasing the spring rate. Braking or accelerating the vehicle also displaced the valve and increased the hardness of the springing.

The action of the pendulum would, therefore, have provided soft springing for level straight roads, but would have prevented excessive rolling on corners and have reduced pitching when the vehicle was braked or accelerated.

After a bump, the air displaced from the bellows tended to return from the reservoir, but the flow was checked by the valve closing on its lower seating. A small by-pass at the side of the valve enabled the air to bleed back to the bellows at a relatively slow rate, and this would have provided the action of a recoil damper.

Liquid Springs In The Commercial Motor, January 25, 1946, an article was published under the heading "Will the Liquid Spring Revolutionize Vehicle Suspension?" and although the early promise of this type of spring for road vehicles has not materialized, it cannot be dismissed as obsolete. Its success in aircraft practice is indicative of its favourable potential .for vehicle use. A possible operational disadvantage is that the liquid might overheat after prolonged running, and sealing difficulties could reduce the reliability of the unit. The spring described in the article was a Dowty unit, and was fitted to a private car for experimental trials.

Simplicity and small size are the outstanding merits of a liquid spring, the diameter of the Dowty cylinder being 3* in., compared with the diameter of a comparable helical coil spring of 10* in. The liquid had a compressibility of 17 per cent., and the pressure applied could be up to 100,000 p.s.i.

" The components essentially comprised a piston operating in a cylinder filled with a liquid, a ball valve in the piston being provided to give a damping effect; compression of the fluid was caused by the movement of the piston rod. A representative of The Commercial Motor who rode in the test vehicle reported that the springing was "very satisfactory."

The test vehicle was repeatedly driven at speed over normal-height kerb stones, the impact shocks being wholly absorbed by the liquid suspension units, the passengers suffering no uncomfortable jolting.

The Problem in Perspective These brief references to the less conventional suspension systems indicate the complexity of the factors that have to be considered in reviewing the potential scope of different designs. My personal views are summarized in the following paragraphs in an attempt, at the risk of over-simplification, to present the subject in the right perspective. It is suggested that:—

Operationally, the nearest approach to the ideal suspension for commercial vehicles is provided by the increasing-periodicity system.

This characteristic would give better ride conditions and reduce vibration to the minimum, because the suspension would be soft when the deflections were small and increase in hardness with larger deflections.

Although complexity and cost might preclude a system of the Citroen hydro-pneumatic type being used, the same characteristic might be obtained by more simple means.

The air-sack system could be produced in quantity as standard components at a cost that would not greatly exceed that of conventional springs.

Sales-resistance to an entirely unconventional, more costly system would be prejudicial to its introduction on standard vehicles and would not be overcome until convincing proof had been provided that reliability was increased and maintenance costs reduced. This would particularly apply to goods-carrying vehicles.

The success of rubber suspension may depend upon the extent to which approved types can be adapted by vehicle manufacturers to the requirements of the chassis designer. A standard rubber spring that had self-damping properties and could, if necessary, be employed in conjunction with air cushioning as an auxiliary might provide a near-ideal suspension and offer production advantages. Developments in the shape of rubber compression springs may facilitate the design of suspension systems, with practically any required characteristic.

The difficulty of providing efficient damping may hamper the introduction of some forms of rubber and air suspension.