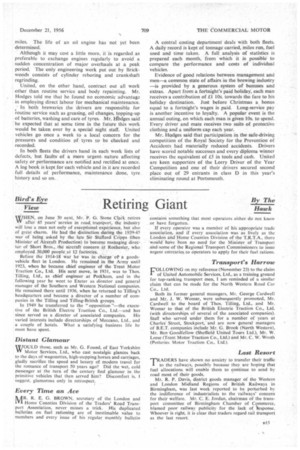 Page 49, 21st December 1956 — Bird's Eye View
Close
Noticed an error?
If you've noticed an error in this article please click here to report it so we can fix it.
Keywords : Western National, First Potteries, Thomas Tilling

WHEN, on June 30 next, Mr. P. G. Stone Clark retires VI, after 45 years' service in road, tranSport, the industry will lose a man not only of exceptional experience, but also of great charm. He had the distinction during the 1939-45 war of being asked by the late Sir Stafford Cripps (then Minister of Aircraft Production) to become managing director of Short Bros., the aircraft concern at Rochester, who employed .30,000 people at 12 factories.

Before the 1914-18 War he was in charge of' a goodsvehicle fleet in London. He remained in the Army until 1923, when he became chief engineer of the Trent Motor Traction Co., Ltd. His next move, in 1931, was to Thos. Tilling, Ltd., as chief engineer at Peckham, and in the following year he went to Exeter as director and general manager of the Southern and Western National companies. He remained there until 1936, when he returned to Tilling's headquarters and became a director of a number of companies in the Tilling and Tilling-British groups. In 1949 he transferred to the "opposition "—the executive of the British Electric Traction Co., Ltd.—and has since served as a director of associated companies. His varied interests include directorships of VIcccarto, Ltd.. and a couple of hotels. What a satisfying business life he must have spent.

WOULD those, such as Mr. G. Found, of East Yorkshire YV Motor Services. Ltd., who cast nostalgic glances back to the days of wagonettes, high-stepping horses and carriages, gladly sacrifice the speed and luxury of modern travel for the romance of transport 50 years ago? Did the wet, cold passenger at the turn of the century find glamour in the primitive vehicles that then served him? Discomfort is, I suggest, glamorous only in retrospect.

Every Time an Ace

NAR. R. E. G. BROWN, secretary of the London and in Home Counties Division of the Traders' Road Transport Association, never misses a trick. His duplicated bulletins on fuel rationing are of inestimable value to members and every issue of his regular monthly bulletin

contains something that most operators either do not know or have forgotten. If every operator was a member of his appropriate trade association, and if every association was as lively as the London and Home Counties Division of the T.R.T.A.. there 'would have been no need for the Minister of Transport and,some of the Regional Transport Commissioners to issue urgent entreaties to operators to apply for their fuel rations.

L'OLLOWING on my reference (November 23) to the claim

of United Automobile Services, Ltd.. as a training ground for top-ranking transport men. I am reminded of a similar claim that can be made for the North Western Road Car Co., Ltd. Both its former general managers, Mr_ George Cardwell and Mr. J. W. Womar, were subsequently promoted, Mr, Cardwell to the board of Thos. Tilling, Ltd., and Mr. Woroar to that of the British Electric Traction Co., Ltd. (with directorships of several of the associated companies). Staff who served under them for a number of years at Charles Street, Stockport, and are now general managers of B.E.T. companies include Mr. G. Brook (North Western), Mr. Ben Goodfellow (Sheffield United Tours Ltd.), Mr. W. Leese (Trent Motor Traction Co., Ltd.) and Mr. C. W. Wroth (Potteries Motor Traction Co„ Ltd.).

TRADERS have shown no anxiety to transfer their traffic to the railways, possibly because they are hoping that fuel allocations will enable them to continue to send by road most of their goods.

Mr. R. P. Davis, district goods manager of the Western and London Midland Regions of British Railways in Birmingham, was last week reported to be perturbed by the indifference of industrialists to the railways' concern for their welfare. Mr. C. E. Jordan, chairman of the transport committee of Birmingham Chamber of Commerce. blamed poor railway publicity for the lack of ksponse. Whoever is right, it is clear that traders regard rail transport as the last resort.