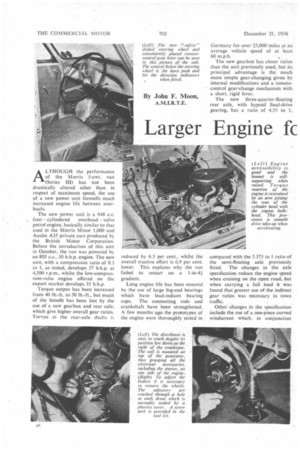 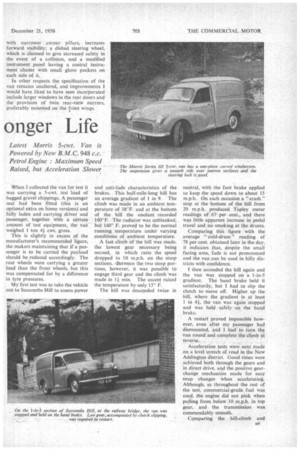 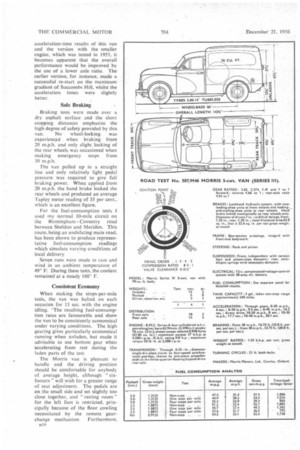 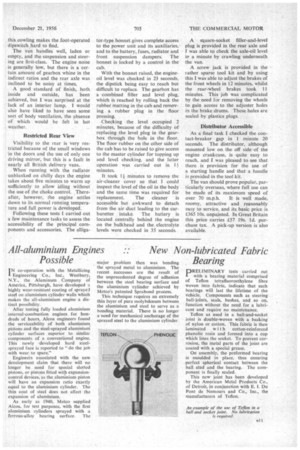 ALTHOUGH the performance of the Morris 5-cwt. van (Series III) has not been drastically altered other than in respect of maximum speed, the use of a new power unit foretells much increased engine life between overhauls.

four cylindered overhead valve petrol engine, basically similar to that used in the Morris Minor 1,000 and Austin A35 private cars produced by the British Motor Corporation. Before the introduction of this unit in October, the van was powered by an 803 c.c., 30 b.h.p. engine. The new unit, with a compression ratio of 8.3 to 1, as tested, develops 37 b.h.p. at 4,500 r.p.m., whilst the low-compression-ratio engine offered on the export market develops 35 b.h.p.

Torque output has been increased from 40 lb.-ft. to 50 lb.-ft., but much of the benefit has been lost by the use of a new gearbox and rear axle. which give higher overall gear ratios. Torque at the rear-axle shafts is reduced by 6.3 per cent., whilst the overall tractive effort is 6.9 per cent. lower. This explains why the van failed to restart on a 1-in-41 gradient.

Long engine life has been ensured by the use of large big-end bearings which have lead-indium bearing caps. The connecting rods and crankshaft have been strengthened. A few months ago the prototypes of the engine were thoroughly tested in Germany for over 25,000 miles at an average vehicle speed of at least 60 m.p.h.

The new gearbox has closer ratios than the unit previously used, but its principal advantage is the much more simple gear-changing given by internal modifications and a remotecontrol gear-change mechanism with a short, rigid lever.

The new three-quarter-floating rear axle, with hypoid final-drive gearing, has a ratio of 4.55 to 1,

compared with the 5.375 to 1 ratio of the semi-floating axle previously fitted. The changes in the axle specification reduce the engine speed when cruising on the open road, but when carrying a full load it was found that greater use of the indirect gear ratios was necessary in town traffic.

Other changes in the specification include the use of a one-piece curved windscreen which, in conjunction with narrower corner pillars, increases forward visibility; a dished steering wheel, which is claimed to give increased safety in the event of a collision, and a modified instrument panel having a central instrument cluster with small glove pockets on each side of it.

In other respects the specification of the van remains unaltered, and improvements 1 would have liked to have seen incorporated include larger windows in the rear doors and the provision of twin rear-view mirrors, preferably mounted on the front wings.

When I collected the van for test it was carrying a 5-cwt. test load of bagged gravel chippings. A passenger seat had been fitted (this is an optional extra on home versions) and fully laden and carrying driver and passenger, together with a certain amount of test equipment, the van weighed I ton 41 cwt. gross.

This is slightly in excess of the manufacturer's recommended figure, the makers maintaining that if a passenger is to be carried the payload should be reduced accordingly. The rear wheels were carrying a greater load than the front wheels, but this was compensated for by a difference in tyre pressures.

My first test was to take the vehicle out to Succombs Hill to assess power and anti-fade characteristics of the brakes. This half-mile-long hill has an average gradient of 1 in 9. The climb was made in an ambient temperature of 38°F. and at the bottom of the hill the coolant recorded 160°F. The radiator was unblanked, but 160° F. proved to be the normal running temperature under varying conditions of ambient temperature.

A fast climb of the hill was made, the lowest gear necessary being second, in which ratio the speed dropped to 10 m.p.h. on the steep sections. 'Between the two steep portions, however, it was possible to engage third gear and the climb was made in 1l. min. The ascent raised the temperature by only 15° F.

The hill was descended twice in neutral, with the foot brake applied to keep the speed down to about 15 m.p.h. On each occasion a " crash " stop at the bottom of the hill from 20 m.p.h. produced Tapley meter readings of 67 per cent., and there was little apparent increase in pedal travel and no smoking at the drums.

Comparing this figure with the average " cold-drum " reading of 78 per cent, obtained later in the day, it indicates that, despite the small facing area, fade is not pronounced and the van can be used in hilly districts with confidence.

I then ascended the hill again and the van was stopped on a 1-in-5. gradient. The hand brake held it satisfactorily, but I had to slip the clutch to move off. Higher up the hill, where the gradient is at least I in 41. the van was again stopped and was held safely on the hand brake.

A restart proved impossible however, even after my passenger had dismounted, and I had to turn the van round and complete the climb in reverse.

Acceleration tests were next made on a level stretch of road in the New Addington district. Good times were achieved both through the gears and in direct drive, and the positive gearchange mechanism made for easy snap changes when accelerating. Although, as throughout the rest of the test, commercial-grade fuel was used, the engine did not pink when pulling from below 10 m.p.h. in top gear, and the transmission was commendably smooth.

Comparing the hill-climb and a9 acceleration-time results of this van and the version with the smaller engine, which was tested in 1953, it becomes apparent that the overall performance would be improved by the use of a lower axle ratio. The earlier version, for instance, made a successful re-start on the maximum gradient of Succombs Hilt, whilst the acceleration times were slightly better.

Braking tests were made over a dry asphalt surface and the short slopping distances emphasize the high degree of safety provided by this van. No wheel-locking was experienced when braking from 20 m.p.h. and only slight locking of the rear wheels was occasioned when making emergency stops from 30 m.p.h.

The van pulled up in a straight line and only relatively light pedal pressure was required to give full braking power. When applied from 20 m.p.h. the hand brake locked the rear wheels and produced an average Tapley meter reading of 35 per cent.. which is an excellent figure.

For the fuel-consumption tests 1 used my normal 10-mile circuit on the Birmingham Coventry road between Sheldon and Meriden. This route, being an undulating main road, has been shown to produce representative fuel-consumption readings which simulate varying conditions of local delivery.

Seven runs were made in rain and wind in an ambient temperature of 49° F. During these tests, the coolant remained at a steady 1600 F.

Consistent Economy When making the stops-per-mile tests, the van was halted on each occasion for 15 sec. with the engine idling. The resulting fuel-consumption rates arc favourable and show the van to be consistently economical under. varying conditions. The high gearing gives particularly economical running when unladen, but made it advisable to use bottom gear when accelerating from rest during the laden parts of the test.

The Morris van is pleasant to handle and the driving position should be comfortable for anybody of average height, although "sixfooters " will wish for a greater range of seat adjustment. The pedals are on the small side and set slightly too close together. and " resting roam " for the left foot is restricted, principally because of the floor cowling necessitated by the remote gearchange mechanism Furthermore.

8tH this cowling makes the foot-operated dipswitch hard to find.

The van handles well, laden or empty, and the suspension and steering are first-class. The engine noise is generally low, but there is a certain amount of gearbox whine in the indirect ratios and the rear axle was inclined to be noisy at times.

A good standard of finish, both inside and outside, has been achieved, but I was• surprised at the lack of an interior lamp. I would also have liked to have seen some sort of body ventilation, the absence of which would be felt in hot weather.

Visibility to the rear is very restricted because of the small windows in the doors and the use of only one driving mirror, but this is a fault in nearly all British delivery vans.

When running with the radiator unblanked on chilly days the engine takes about five minutes to warm up sufficiently to allow idling without the use of the choke control. _Thereafter, however, the engine settles down to its normal running temperature and full power is developed.

Following these tests I carried out a few maintenance tasks to assess the accessibility of the principal components and accessories. The alliga

tor-type bonnet gives complete access to the power unit and its auxiliaries,. and to the battery, fuses, radiator and front suspension dampers. The bonnet is locked by a control in the cab_ With the bonnet raised, the engineoil level was checked in 23 seconds, the dipstick being easy to reach but difficult to replace. The gearbox has a combined filler and level plug, which is reached by rolling back the rubber matting in the cab and removing a rubber plug in the floor pressing.

Checking the . level occupied 2 minutes, because of the difficulty of replacing the level plug in the gearbox through the hole in the floor. The floor rubber on the other side of the cab has to be raised to give access to the master cylinder for topping up and level checking, and the latter operation was carried out in minutes.

It took 11 minutes to remove the air-cleaner cover so that T could inspect the level of the oil in the body and the same time was required for replacement. The cleaner is accessible but awkward to detach from the air duct leading to the carburetter intake. The batiery is located centrally behind the engine on the bulkhead and the electrolyte levels were checked in 35 seconds.

A square-socket filler-and-level plug is provided in the rear axle and I was able to check the axle-oil level in a minute by crawling underneath the van.

A screw jack is provided in the rather sparse tool kit and by using this I was able to adjust the brakes of the front wheels in 12 minutes, whilst the rear-wheel brakes took 11 minutes. This •job was complicated by the need for removing the wheels to gain access to the adjuster holes in the brake drums. These holes are sealed by plastics plugs.

Distributor Accessible As a final task I checked the contact-breaker gap in 1 minute 20 seconds. The distributor, although mounted low on the off side of the engine crankcase, is quite easy to reach, and I was pleased to see that there is provision for the use of a starting handle and that a handle is provided in the tool kit.

The van should prove popular, particularly overseas, where full use can be made of its maximum speed of over 70 m.p.h. It is well made, roomy, attractive and reasonably easy to service, and its basic price is £365 10s. unpainted. In Great Britain this price carries £57 19s. ld. purchase tax. A pick-up version is also available.