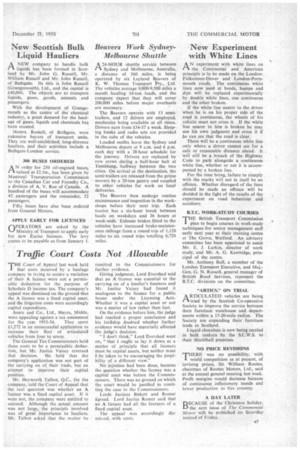 THE Court of Appeal last week held that costs incurred by a haulage company in trying to secure a variation of their A licence were not a permissible deduction for the purpose of Schedule D income tax. The company's appeal was dismissed on the ground that the A licence was a fixed capital asset, and the litigation costs were accordingly capital expenditure.

Annis and Co., Ltd., Hayes, Middx, were appealing against a tax assessment for the year 1953-34. They spent £1,272 in an unsuccessful application to increase their fleet of articulated vehicles from four to seven.

The General Tax Commissioners held these costs to be a permissible deduction, but Mr. Justice Vaisey reversed that decision. He held that the company's application was not part of the carrying on of their trade, but an attempt to improve their capital position.

Mr. Heyworth Talbot, Q.C., for the company, told the Court of Appeal that the real question was whether an A licence was a fixed capital asset. If it were not, the company were entitled to succeed. Although the actual amount was not large, the principle involved was of great importance to hauliers. Mr. Talbot asked that the matter be remitted to the Commissioners for further evidence.

Giving judgment, Lord Evershed said that an A licence was essential to the carrying on of a haulier's business and Mr. Justice Vaisey had found it analogous to the licence for a public house under the Licensing Acts. Whether it was a capital asset or not was a matter of law rather than fact.

On the evidence before him, the judge had readied a proper conclusion and his lordship doubted whether further evidence would have materially affected the judge's decision.

"I don't think," Lord Evershed went on, 'that I ought to lay it dowa as a matter of principle that all licences must be capital assets, but neither must I be taken to be encouraging the possibility of a different view."

No injustice had been done, because the question whether the licence was a capital asset was before the Commissioners. There was no ground on which the court would be justified in remitting the case to the Commissioners.

Lords Justices Birkett and Romer agreed_ Lord Justice Romer said that art A licence had all the features of a fixed capital asset.

The appeal was accordingly dismissed, with costs.