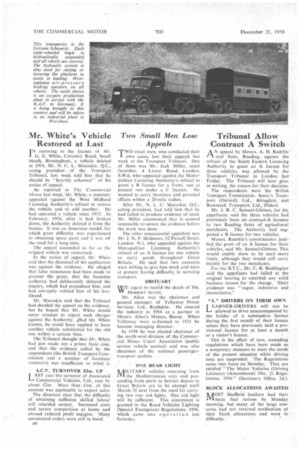 AN appeal by Messrs. A. H. Rumble and Sons, Reading. against the refusal of the South Eastern Licensing Authority to grant an A licence for three vehicles, was allowed by the Transport Tribunal in London last Friday. The Tribunal will later give, in writing, the reason for their decision.

Mr, J. R. C. Samuel-Gibbon, for the appellants, said the three vehicles had previously been on contract-A licences to two Reading firms of agricultural merchants. The Authority had suggested a B licence for two vehicles,

Messrs. Rumble's commitments justilied the grant of an A licence for three vehicles, said Mr. Samuel-Gibbon. This would enable them to be used. more freely, although they would still carry mainly for the two merchants.

For the B.T.C., Mr. C. R. Beddington said the appellants had failed at the original hearing to establish any valid business reason for the change. Their evidence was "vague, indecisive and inconclusive."

"L" DRIVERS ON THEIR OWN T EARNER-DR1VERS will not be allowed to drive unaccompanied by the holder of a substantive licence during the first month of their licence unless they have previously held a provisional licence for at least a month or a visitor's licence.

This is the effect of new, amending regulations which have been made as a temporary measure to meet the needs of the present situation while driving tests are suspended. The Regulations came into force on Monday. They are entitled "The Motor Vehicles (Driving Licences) (Amendment) (No. 2) Regulations, 1956" (Stationery Office, 2d.).

BLOCK ALLOCATIONS AWAITED IVIOST Sheffield hauliers had their al basic fuel rations by Monday morning, but many of the large concerns had not received notification of their block allocations and were in difficulty.