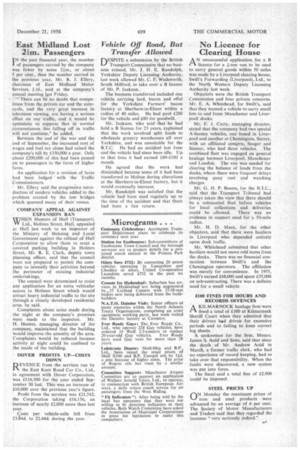 Page 39, 21st December 1956 — East Midland Lost 21m. Passengers
Close
Noticed an error?
If you've noticed an error in this article please click here to report it so we can fix it.
Keywords : Kingston Upon Hull, Nottingham, Business / Finance

IN the past financial year, the number of passengers carried by the company was fewer by some 21m., or about 5 per cent., than the number carried in the previous year, Mr, R. J. Ellery, chairman of East Midland Motor Services, Ltd.. said at the company's annual meeting last Friday.

There can be no doubt that competition from the private car and the autocycle, and the very great increase in television viewing, are having a serious effect on our traffic, and it would be optimistic to suppose that in normal circumstances this falling off in traffic will not continue," he added.

Between the end of the war and the end of September, the increased cost of wages and fuel tax alone had raised the eompanyls bill by £330,000 a year. Only about £200,000 of this had been passed on to passengers in the form of higher fares.

An application for a revision of fares had been lodged with the Traffic Commissioners.

Mr. Ellery said the progressive introduction of modern vehicles added to the problem created by the low bridges which spanned many of their routes.

COMPANY APPEAL AGAINST EXPANSION RAN WREN Hunters of Hull (Transport), YV Ltd., Holmes Street, Hull, appealed at Hull last week to an inspector of the Ministry of Honsing and Local Government against the refusal of Hull Corporation to allow them to erect a covered parking building in Holmes Street, Mr. R. E. Clark, deputy town planning officer, said that the council were not prepared to permit the company to intensify their activities beyond the perimeter of existing industrial undertakings.

The council were determined to resist any application for art extra vehicular access to Holmes Street which would attract heavy industrial traffic to the site through. a closely developed residential area, he said.

Complaints about noise made during the night at the company's premises were made to the inspector. Mr. H. Hunter, managing director of the company, maintained that the buildiog would improve the amenity of the area. Complaints would be reduced because activity at night could be confined to the inside of the building.