Fares Not to Increase in Some Towns: South Wales Opposition 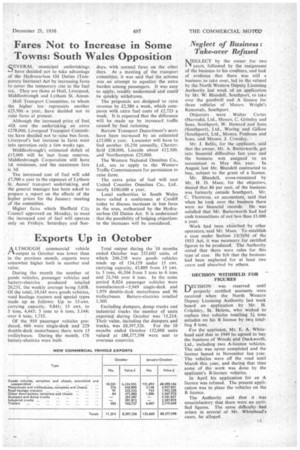 Page 37, 21st December 1956 — Fares Not to Increase in Some Towns: South Wales Opposition
Close
Noticed an error?
If you've noticed an error in this article please click here to report it so we can fix it.

SEVERAL municipal undertakings have decided not to take advantage of the Hydrocarbon Oil Duties (Temporary Increase) Act by increasing fares to cover the temporary rise in the fuel tax. They are those at Hull, Liverpool, Middlesbrough and Lytham St. Annes.

Hull Transport Committee, to whom the higher tax represents another £23,500 a year, have decided not to raise fares at present.

Although the increased price of fuel vill cost the undertaking an extra £278,000, Liverpool Transport Committee have decided not to raise bus fares. Liverpool's last increase in fares went into operation only a few weeks ago.

Middlesbrough'S estimated deficit of £15,000 will be 'met from reserves. Middlesbrough Corporation still have Id. minimum, and the maximum fare is 3d.

The increased cost of fuel will add £7,500 a year to the expenses of Lytham St. Annes' transport undertaking, and the general manager has been asked to prepare a report on the effects of the higher prices for the January meeting of the committee_ Higher fares which Sheffield City Council approved on Monday, to meet the increased cost of fuel will operate only on Fridays, Saturdays and Sun

days, with normal fares on the other days. At a meeting of the transport committee, it was said that the scheme was an attempt to equalize the extra burden among passengers. It was easy to apply, readily understood and could be quickly withdrawn.

The proposals are designed to raise revenue by £2,580 a week, which compares with extra fuel costs of £2,723 a week.. It is expected that the difference will be made up by increased traffic caused by fuel rationing.

The Western National Omnibus Co., Ltd., are to apply to the Western Traffic Commissioners for permission to raise fares.

Local authorities in South Wales have called a conference at Cardiff today to discuss increases in bus fares in the area, authorized by the Hydrocarbon Oil Duties Act. It is understood that the possibility of lodging objections to the increases will be considered.